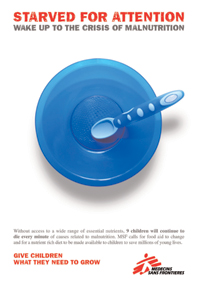 Tokyo/New York, July 3, 2008 – The international medical humanitarian organization Doctors Without Borders/Médecins Sans Frontières (MSF) today called on G8 leaders who will gather next week in Japan to take bold decisions to adequately finance food aid and nutrition programs directed at young children. With the crisis of malnutrition contributing to between three and five million child deaths annually, the summit must commit to providing funds to implement new and effective strategies to address malnutrition.

At the G8 in Japan in 2000, world leaders showed that they could act to stimulate concrete change by creating the Global Fund to Fight AIDS, Tuberculosis and Malaria. So, today, there is significant support for a country that wants, for example, to scale-up AIDS treatment. MSF is now calling for the same level of commitment from the G8 in radically reducing malnutrition in children.

“There is an urgent need to act now to scale-up treatment for children who are most at risk of dying of malnutrition,” said Dr. Susan Shepherd, nutritional advisor for MSF’s Access to Essential Medicines Campaign. “Ninety five percent of children with the most severe form of malnutrition do not get adequate treatment. G8 leaders can take immediate steps to get children this life-saving treatment.”

The UN estimates US$8 billion will be needed each year to fund comprehensive nutrition strategies for children and women in 100 million families at risk. One-and-a-half billion dollars of this is needed annually to treat those children most at risk of death from the most severe form of malnutrition. G8 leaders need to ensure that affected countries can scale-up programs and know that highly nutritious ready-to-use food will be available to them free of charge.

MSF is seeing rising numbers of malnourished children in its projects located in several of the world’s malnutrition hotspots, including Ethiopia and Niger.  The ‘hunger gap’ period between harvests, compounded by drought, has led to elevated levels of malnutrition. In Oromiya and the Southern Region of Ethiopia, MSF has admitted to its projects more than 6,500 severely malnourished children since mid-May.

Malnutrition is a chronic emergency that is only exacerbated by rising food prices. When food prices are high, poor families must cut out expensive animal source foods such as dairy, eggs, and meats from their diets. These foods are key to ensuring young children grow properly and are able to fend off disease.

Yet food aid for children consists of corn or wheat/soy-blended porridge without any animal source content, which are not effective at addressing malnutrition. The milk component of donated enriched flours targeted at young children was eliminated from U.S. food aid in the late 1980s for economic reasons, when there were no more milk surpluses. Low cost solutions in this case can be dangerous.

As more and more families ask themselves how they will feed their children, MSF asks the G8 leaders if they are willing to make a substantial and sustained investment in children’s futures.

“We all know which foods children need to grow and be healthy, so how is it leaders are satisfied with the double standard of sending food that they wouldn’t dream of giving their own kids?” said Dr. Shepherd.  “Without concrete, significant long-term commitments, we are fooling ourselves to think that we will have a significant impact on treatment and prevention of child malnutrition.”