Gaza: "The Daily Pause in Bombing Has Not Changed Anything"

Jessica Pourraz, MSF field coordinator in Gaza, observes that the situation in the field remains unchanged. Given the security conditions, medical teams and humanitarian aid workers are still unable to deliver aid to a population that has nowhere to flee. 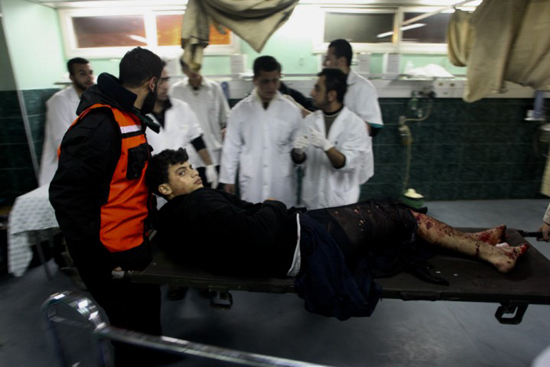 Jessica Pourraz, Doctors Without Borders/Médecins Sans Frontières (MSF) field coordinator in Gaza, observes that the situation in the field remains unchanged. Given the security conditions, medical teams and humanitarian aid workers are still unable to deliver aid to a population that has nowhere to flee.

It is still extremely dangerous to move about because aerial bombing continues unabated. Ambulances have not received authorization to pass behind the tanks in search of the wounded. Most of those who reach a hospital are seriously wounded. Others remain at home, waiting for the fighting to stop so that they can seek treatment.

"Displaced families try to take refuge in schools as best they can, but there is no safe place in Gaza today."

The daily pause in bombing has not changed anything. It affects only Gaza City, not the urban areas on the outskirts. Tanks have begun to return to those areas, including the neighborhoods of Beit Lahia, Beit Hanoun, Sijaya, and Zeïtoun. Given growing numbers of wounded civilians, that’s where you have to go to find them. Don’t be deceived—the lull in bombing is not helping humanitarian aid workers to do their jobs or helping people reach the hospitals. We are in Gaza, in the middle of everything, but we can neither reach patients nor do our work properly. There is a real problem. We need to be able to reach the wounded and the wounded need to be able to get to the hospitals. We have to be able to bring in supplies, which remain very limited because the trucks cannot move around.

We are providing medical supplies to hospitals, and our medical staff are treating the wounded and ill who are in areas close to those hospitals because it is too dangerous to move around. Hospital facilities are functioning with skilled staff. Between December 27 and January 5, Shifa Hospital performed more than 300 major surgeries, primarily amputations, cranial and multiple trauma procedures, and exploratory abdominal procedures—all difficult operations.

There is a lack of specialized surgeons. An MSF team with a vascular surgeon is scheduled to arrive—if the team manages to enter. This specialty is critical when dealing with wounded patients whose wounds bleed heavily. There is a space shortage in intensive care, but we are trying to arrange for the delivery of inflatable tents so that we can set up an intensive care unit and two operating rooms. If we have access, we have the resources necessary to provide medical care here.

“The displaced persons need drinking water and basic survival items …The worst is that humanitarian aid workers are there and can do nothing.”

A human catastrophe is playing out before our eyes. Usually, when a country is at war, people flee. However, in Gaza no one is fleeing. Gaza has the world’s highest population density, and Gazans have nowhere to go. People are living in a state of constant terror and want just one thing: for it all to stop. They cannot sleep. Every time you go to bed, you don’t know whether the house will still be standing in the morning.

Many families have left their homes, either because the tanks are approaching or because the house has been completely destroyed. They try to take refuge in schools, as best they can, but there is no safe place in Gaza today. The bombing is incessant. There is no electricity. The hospitals depend on generators.

Lack of food and basic supplies

Food is lacking, too. There are huge lines in front of the bakeries. Before the war, 1 million people—out of a total population of 1.5 million—received food aid. Today, the needs have probably grown but access has decreased. Trucks can no longer travel safely and people cannot get to the distribution centers. The displaced persons need drinking water and basic survival items, like mattresses and blankets—all those things that allow people to survive. The worst is that humanitarian aid workers are there and can do nothing.