Though the number of people in Gaza suffering after-effects of serious injuries has increased in recent years, it remains very difficult to obtain access to appropriate, specialized care. 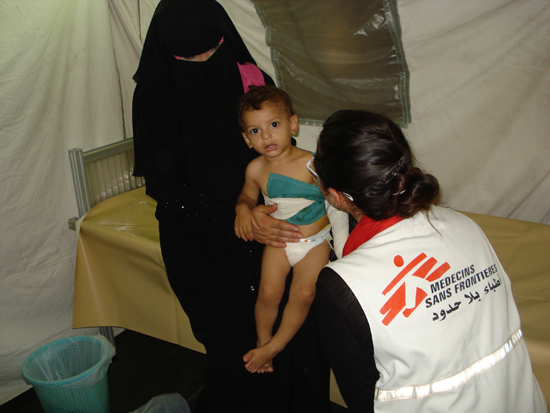 A young boy recovering after surgery in Gaza.

The number of people in the Gaza Strip suffering the after-effects of serious injuries has increased in recent years. However, with the embargo currently in effect, it is very difficult to obtain access to appropriate, specialized care. In July 2010, Doctors Without Borders/Médecins Sans Frontières (MSF) signed an agreement with the Gaza health authorities and opened a reconstructive surgery program. In September 2011, 24 patients received treatment through an ad hoc hand surgery mission.

During the Israeli military's December 2008 "Cast Lead" offensive and due to a growing number of domestic accidents, many Gaza residents have suffered wounds that require reconstructive surgery—also known as non-emergency or revision surgery—after their initial medical-surgical treatment.* Highly-specialized surgery is required for very complicated cases.

It is difficult to obtain such specialized care in the Gaza Strip today. Patients must wait for months to obtain permission to leave and undergo surgery in a third country (usually Jordan, Israel, or Egypt). As a result of the Israeli embargo and restrictions on travel and movement, Gazan doctors and surgeons are also unable to leave the Territory to get training elsewhere.

Since signing the agreement to open the reconstructive surgery program, MSF teams composed of surgeons, operating room nurses, and anesthetists have conducted a number of ad hoc missions during which they’ve worked closely with surgeons and hospital teams from Nasser Hospital in Khan Yunis, in the southern Gaza Strip.

The patients they treated needed attention for complicated injuries or severe burns that affect the normal use of their limbs. After surgery, they received rehabilitation treatment, including bandaging and physical therapy, in one of MSF's two clinics in Gaza. The objective is to ease their pain, help them to recover adequate mobility, and, to the extent possible, reduce the social and psychological impacts of their wounds.

In September 2011, a French hand surgeon joined the MSF program. Over five days, the joint team operated on 24 patients suffering from the after-effects of burns, hand wounds, skin contracture (axillary, elbows and hands), finger amputations, and syndactylism (a congenital malformation characterized by attachment and the partial or complete fusion of two or more fingers or toes).

This kind of joint program also provides an opportunity for MSF staff and Gaza doctors to exchange and share medical, surgical and anesthetic techniques, particularly with regard to treating young children.

* Because fuel supplies in the Gaza Strip are limited, its only electrical power plant has slowed operation. Power interruptions occur daily. As a result, the population makes do with the resources at hand – generators, contraband gas canisters, candles and oil lamps. Their use can result in serious domestic accidents.