Inhumane living and hygiene conditions in detention facilities in the Evros region in Greece are causing major health problems for migrants and asylum seekers living there, MSF said. 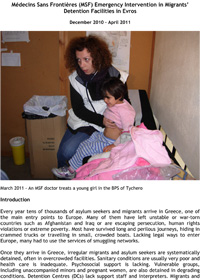 ATHENS, JUNE 15, 2011 – Inhumane living and hygiene conditions in detention facilities in the Evros region in Greece are causing major health problems for migrants and asylum seekers living there, according to a report issued today by the international medical humanitarian organization Doctors Without Borders/Médecins Sans Frontières (MSF).

Medical data collected by MSF reveal that more than 60 percent of the migrants’ medical conditions are directly caused by or linked to the degrading conditions. Out of the 1,809 patients treated by MSF doctors between December 2010 and March 2011, 1,147 were diagnosed with respiratory tract infections, body pains, diarrhea, gastrointestinal disorders, psychological conditions, and skin diseases.

“Most of the migrants we have treated were not ill when they first entered the detention facilities,” said Ioanna Pertsinidou, coordinator of MSF’s project for migrants in Greece. “They fell sick from being held in overcrowded cells lacking proper ventilation, water and sanitation, and from not having quality food or the possibility of spending time outdoors.”

From MSF’s experience working in the detention facilities in Evros, there is no evidence indicating that people entering Greece pose a public health risk to Greek society, as recently stated by Greece’s minister of health. On the contrary, it is the inhumane living and hygiene conditions in these facilities—where some migrants are kept for up to six months—that are causing significant deterioration of their physical and mental health. These detention conditions significantly increase the risk of communicable disease outbreaks, as stated in a report published in May 2011 by the European Center for Disease Prevention and Control and the World Health Organization.

MSF urges Greek authorities to ensure dignified living conditions in detention facilities, including appropriate accommodation, sufficient distribution of food, clothing and personal hygiene items, and adequate periods of time spent outdoors. It is essential to ensure migrants receive adequate medical care and mental healthcare, to initiate systematic medical screening for new arrivals, and to support timely secondary referral and follow-up of chronic diseases. The Ministries of Health and Citizens Protection should ensure coordination among the involved stakeholders—locally, nationally and at the EU level—and maximize the timely use of existing funds and resources.

In early March 2011, MSF handed over its medical activities to teams deployed by the Ministry of Health, but continues to distribute relief items to detained migrants. Despite the availability of European funds, conditions in the detention facilities have not improved.

MSF has been providing medical care and psychosocial support to migrants and asylum seekers in Greece since 1996. Since the beginning of December 2010, MSF teams have been providing healthcare and have been working to improve living and hygiene conditions in the border police stations of Tychero, Soufli, and Feres and in the detention center of Filakio. MSF doctors have treated 1,809 migrants, 18 of whom were under five years of age. MSF psychologists have provided mental health support to 75 migrants. MSF staff have distributed over 8,480 sleeping bags, over 15,500 pairs of socks, 4,500 pairs of gloves, 4,500 hats and 10,000 hygiene kits.

During the first two months of 2011, at least 22 people lost their lives while trying to cross the border between Turkey and Greece in the Evros region.