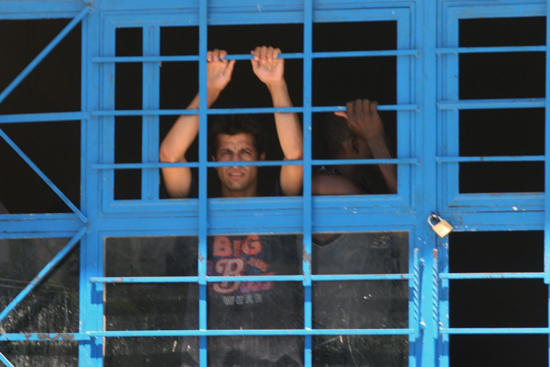 A man looks out a window at the detention facility for undocumented migrants on the island of Lesbos.

Doctors Without Borders/Médecins Sans Frontières (MSF) is resuming activities in the detention center for undocumented migrants in Pagani on the Greek island of Lesbos in the northeastern Aegean Sea. The project is focusing on the provision of psychosocial support to the center’s detainees. Since the first week of August, an MSF team that includes a psychologist and translator has been working inside the detention center, where currently several hundred people are held.

“Most of them have endured a very difficult and perilous journey to reach Greece and are faced with an uncertain future in the country.”

“We have seen that there is an urgent need for psychosocial support for many detainees inside the center," says Micky van Gerven, head of mission of the MSF project for migrants, asylum seekers, and refugees in Greece. “Most of them have endured a very difficult and perilous journey to reach Greece and are faced with an uncertain future in the country. Right now, with the high influx of undocumented migrants and asylum seekers and the decision to detain people for a longer period, the situation inside the center is very difficult for the ones detained, as more than 800 undocumented migrants, including children and pregnant women, are packed inside detention wards that were built to accommodate approximately 400 people.”

MSF was working inside the detention center of Pagani from June to September in 2008. During these four months, an MSF team provided primary health care and psychosocial support to the people, and also carried out construction for the improvement of living conditions. However, the team faced significant obstacles in accessing the detention wards and those who needed medical and psychosocial support. As a result, in September 2008, MSF decided to suspend its activities at the detention center.

“More than 800 undocumented migrants, including children and pregnant women, are packed inside detention wards that were built to accommodate approximately 400 people.”

MSF’s decision to resume activities in Pagani follows an agreement that was made with the national and local authorities to ensure collaboration and access for MSF to undocumented migrants in the detention center for the provision of psychosocial support.

MSF is still following up on the situation of undocumented migrants and asylum seekers in Patras, in southern Greece, where a makeshift migrant’s camp was recently demolished. In Patras, MSF runs mobile clinics and distributes non-food items, such as hygiene materials, sleeping bags, and food containers. At the end of August, MSF will start providing psychosocial support in two more detention centers, in Evros and Rodopi in northern Greece.