Guatemalans barely had time to recover from the eruption of Volcano Pacaya on the evening of May 27 before Tropical Storm Agatha slammed into the country hours later. 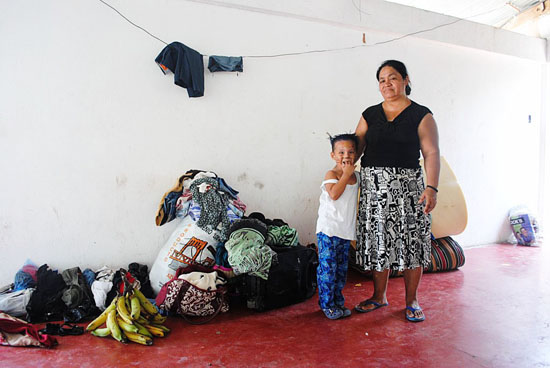 Aura Ines stands with her grandson and the few belongings she was able to rescue in the storm.

First lava, rocks, and sand fell from the sky. Then, the rain came. Guatemalans barely had time to recover from the eruption of Volcano Pacaya on the evening of May 27 before Tropical Storm Agatha slammed into the country hours later. In just a few hours, the tropical storm left its mark on 21 of the 22 departments. There were overflowing rivers, collapsed bridges, roads blocked by landslides, swamped fields, and destroyed homes. Almost 200 people were killed, and tens of thousands evacuated or displaced.

A team from Doctors Without Borders/Médecins Sans Frontières (MSF) was present in Guatemala City at the time, running a sexual violence project. As soon as information started to trickle in about the magnitude of the storm and its effects, Patricia Parra, head of mission for MSF in Guatemala, went into action. “The first priority was to contact government authorities and assess the medical and humanitarian needs,” she said. “Like in other natural disasters, getting accurate information and reaching the affected areas was a real challenge the first couple of days.” The capital’s international airport, which was closed following the eruption of the volcano, remained closed for another five days. Landslides and collapsed bridges blocked roads and some communities were cut off.

The government immediately declared a state of emergency and responded by evacuating and rescuing people, and by turning schools and public buildings into shelters. On Tuesday, June 1,four MSF staff members from other countries in the region arrived by road from El Salvador to join the MSF staff already in the capital. Three teams made up of medical, logistics, and mental health staff then spent three days exploring the affected areas, travelling by car and helicopter across the country, visiting shelters, and speaking to local health authorities. The extent of the disaster is so widespread geographically, that it has taken up to now for the team to get a clear picture of the damage and the medical needs. 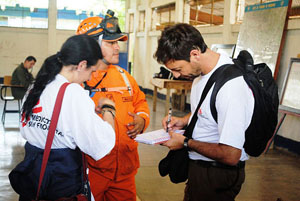 MSFstaff exchange information with a representative of the government’s National Coordinator for Response to Emergencies and Disasters (CONRED).

“This had never happened to me before,” wept Micaela Quin, one of the hundreds of people gathered in the sports hall in the town of Patulul, west of Guatemala City. This is one of the five shelters set up in the town, and most of the people here come from the neighboring village El Triunfo, which was washed out by the river. “I was helping a man rescue his belongings from the river when I saw the man got swept away and people starting shouting at me ‘Micaela, Micaela, go and see your house!’ I then saw the river had got into my house. I got out what I could and the rest got buried.”

MSF is working closely with the Ministry of Health and the National Coordinator for Disasters Reduction (CONRED), exchanging and sharing information about affected areas. One of the worst hit departments is Izabal, in the east of the country and bordering Honduras and the Atlantic coast. The river Motagua, the longest in the country, is normally three meters (10 feet) deep. With the storm, the water quickly rose up to 12 meters (39 feet) high, and up to 600 meters (655 yards) wide, inundating fields and homes along the way.

Aura Ines lived on one of the many banana plantations now flooded in Izabal. She has spent the last five days in a school in the town of Los Amates. “As the Motagua river grew, the plantation’s administrators told us to grab our children and leave our homes,” she said. “Minutes later, the river flooded our home and we lost everything: Beds, furniture, electronic gadgets. We have nothing. We cannot return home now because our home is full of mud and mosquitoes. Here we are OK. They are providing us with shelter, food, water. But I don’t know when we will be able to go back home.” 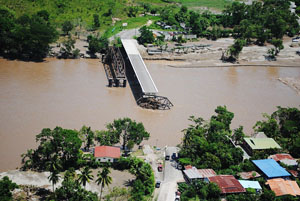 Two bridges in El Rico were destroyed by storm Agatha, isolating the community on one side of the river.

Following the initial assessment, a team of six MSF staff, soon to be joined by more, based themselves in Izabal, where they have started to distribute hygiene kits (with toothbrushes, soap, sanitary towels, buckets, etc.,), and to provide medical care, drinking water, and mental health support to people affected by the flooding.

“We are likely to find respiratory and skin infections, diarrhea, and psychosomatic symptoms like insomnia, anxiety, and depression,” said Cecilia Greco, the MSF emergency coordinator leading the team in Izabal. “It is still raining in this area and people are scared to return back to their homes in case the river grows again.”

MSF has worked in Guatemala since 1986 and currently provides medical treatment and mental health support to victims of sexual violence in the main referral hospital and in clinics in the most violent districts of the capital city.