Since August 5, MSF teams have been distributing thousands of mosquito nets to the population of Matam, a district in the capital Conakry, where the organization is running a nutritional and primary health care program. 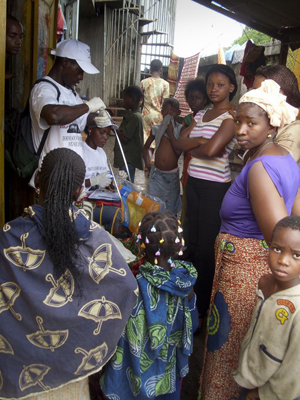 MSF distributes mosquito nets to the local population in the capital city Conakry.

Since early August, Doctors Without Borders/Médecins Sans Frontières (MSF) teams have been distributing thousands of mosquito nets to the population of Matam, a district in the capital Conakry, where the organization is running a nutritional and primary healthcare program.

Thirty teams are going from house to house distributing mosquito nets impregnated with insecticide as well as nails and rope to hang the nets. They spend around 20 minutes talking to the family, explaining how to install the bed nets properly and advising them on how to minimize the proliferation of mosquitoes in their environment.

“Malaria is still the main cause of mortality in Guinea,” explains Jêrome Basset, MSF head of mission in Guinea. “To prevent infection, it is essential to sleep under an impregnated mosquito net at night. It’s also important to get rid of stagnant water, where mosquitoes breed, if it is near the house. Everyone should be involved in hygiene maintenance around the household and clearing away rubbish. That’s why we spend time talking with the families, even though many of them know malaria well.”

MSF teams are giving out 1,800 to 2,500 mosquito nets per day, with the objective of covering the whole Matam district with 80,000 nets by early October. These are part of a stock of three million mosquito nets that the Guinean authorities have recently received from the Global Fund to Fight AIDS, Tuberculosis, and Malaria. The distribution model set up by MSF in Matam may become a model upon which the ministry of health will base its own national distribution campaign in the coming months.

MSF has been working in Guinea since 1984. The organization has run numerous programs there, from treatment programs for malaria, tuberculosis, and HIV/AIDS to assistance to Liberian refugees and emergency response to meningitis and cholera epidemics and violence.