Mobile clinics, water needs, and post-operative care are on the radar

MSF teams focussed on treating injured patients face new challenges, too, with the start of mobile clinics in the capital, of water provision, and of efforts to plan for post-operative care. 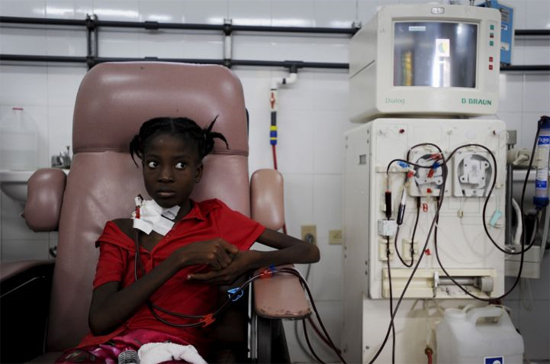 The Doctors Without Borders/Médecins Sans Frontières (MSF) teams in Port-au-Prince and beyond are still mainly occupied with treating and operating on those who were injured in the earthquake nine days ago. That has meant a continuing focus on their operating theatres in the larger MSF hospital structures in the capital. But there are new challenges being taken on, too, with the start of mobile clinics in the capital, of water provision, and of efforts to plan for post-operative care. 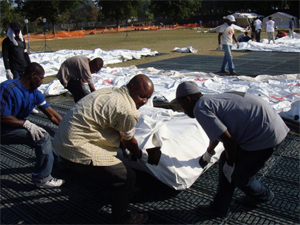 MSF logistical teams began setting up the inflatable hospital tents on Wednesday. Once it is ready, the hospital will have beds for 100 patients.

With more than 900 patients having passed through MSF's surgical facilities and increasing numbers of patients with renal failure receiving life-saving dialysis, there is already a significant need for specialist care and also for long-term care, such as physiotherapy and psychological support.

At the same time, there has been an overall expansion of surgical provision in Haiti, as other medical organizations, including the military, have stepped up their work. Post-operative care will soon become very demanding and MSF is starting to organize post-operative care units. 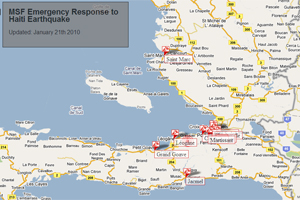 “When you have so many injured people with deep wounds, open fractures, and crushed limbs, the more, and the faster, you can proceed, the better it is,” says Xavier Lassalle, one of MSF's specialist medical advisors. “But providing for these surgical and medical needs will take months, and usually many of these emergency surgical teams stay no more than a few weeks. Most of the wounded have infected wounds in their limbs and they will have to undergo several cleaning operations in theatre, then often orthopedic and reconstructive surgery. This requires post-operative care for several weeks.”

The efforts to secure adequate space for MSF's existing work are also affected by the consequences of yesterday's aftershock. In the Carrefour hospital, which has been a key center for surgery and general treatment, the team is busy setting up new facilities in a neighboring school, as it has become clear that the main hospital building is no longer completely safe. There are additional tents on the grounds, as well.

Meanwhile, specialist engineers checked the buildings' stability at Choscal and Pacot hospitals after the substantial 6.1 tremor. The Choscal hospital is still safe to carry on in the operating theatres though the patients prefer to stay outside in tents. But the Pacot building is at risk of collapsing, so the team is organizing the transfer of the patients to another site.

As the inflatable hospital takes shape, MSF staff are preparing for the substantial logistical challenge of transferring the patients who still need operations to the new 100-bed structure.

For the first time in this emergency, MSF has started mobile clinics in particular parts of the city. Teams are beginning in the Carrefour Feuille and Delmas 77 neighborhoods, locating people who are still in need of treatment following the earthquake or who have general medical needs. At the same time, another project has been started to supply 7,000 people who have lost their homes with drinking water.

Outside of the city, MSF teams continue to push out into areas where medical care is lacking. Work has just started in Léogâne with surgery and general consultations, while mobile clinics have started to contact people in areas like Grand Goave and Duforf, where some 20 people needing major surgery have already been found.