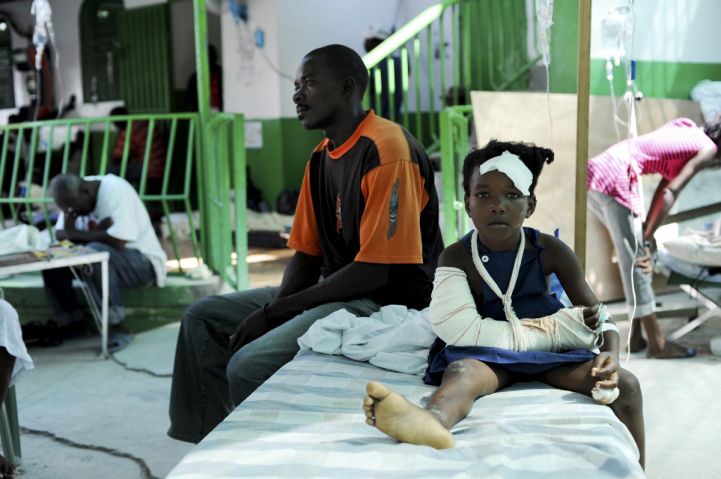 Patients who received emergency surgery after the earthquake in Haiti, like this girl in MSF's Martissant medical facility, now need post-operative care as well.

In the immediate aftermath of the January 12 earthquake in Haiti, Doctors Without Borders/Médecins Sans Frontières (MSF) focused on emergency surgery and life-saving interventions. Now, though, some MSF teams are seeing more patients who need care for pre-existing conditions and for infections or complications affecting wounds they couldn’t get treated properly. This is not to say that the overall need for medical services is declining. Quite the opposite, in fact. There are now large numbers of Haitians who need post-operative care. And despite the tremendous damage done to Haiti’s already limited health infrastructure, there is still the same demand for treatment of chronic conditions, obstetric services, and primary health care that existed before the earthquake.

MSF teams are trying to cover as much of this as they can. The surgery caseload remains substantial. At the MSF site adjacent to the Carrefour hospital in Port-au-Prince, nearly 40 people underwent surgery yesterday, 60 patients were admitted, and 350 had consultations. At Chancerelle hospital, also in the capital, a second operating theater is being restored and readied to accept patients. In Choscal hospital in the Cite Soleil slum, the staff is contending with obstetric emergencies and occasional machete and gunshot wounds.

MSF will transfer 180 patients from its Trinite and Pacot facilities—both of which MSF had been running for several years, and both of which were damaged by the earthquake—to the inflatable hospital MSF built in the Delmas section of Port-au-Prince. (Surgeries are expected to begin on Sunday.) And in Les Cayes, on the island’s southern coast, MSF is supporting the local hospital and has operated on 150 seriously injured people who had somehow been moved there from the capital.

The psychological consequences of the catastrophe are becoming clearer as well. MSF has many years of experience conducing mental health work in disaster areas and already has specialists in Haiti working with patients in its hospitals, as well as with MSF staff who were in country when the quake hit and thus were themselves traumatized by the terrible events and their aftermath.

Going beyond medicine, in Jacmel, west of Port-au-Prince, MSF has begun to distribute kits that include blankets, soap, buckets, and cooking utensils to families who lost their homes and belongings, The teams expect to step up these donations elsewhere in the country as supplies come in. The plan is to eventually distribute 20,000 of these kits. The first shipment is scheduled to arrive by boat today.