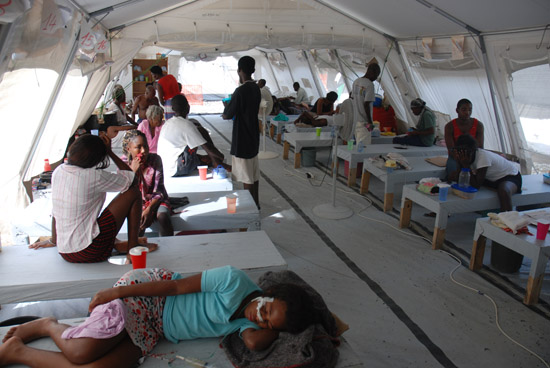 Patients with cholera receive care in one of MSF's cholera treatment centers in Port-au-Prince in September.

One year after the cholera epidemic began, thousands of people in Haiti are still becoming infected every week.

Even though healthcare services and measures to prevent the spread of cholera remain broadly inadequate across the country, there have been significant improvements in Nord Department—one of Haiti’s 10 administrative divisions—in recent months. This region continues to experience successive flare-ups, with an average of 200 to 500 cases recorded each week, but Haiti's Ministry of Health is now managing treatment and Doctors Without Borders/Médecins Sans Frontières (MSF) has just left the area.

Six months ago, MSF initiated the gradual transfer of its operations to Haitian authorities and its partners working to treat cholera in the area of Cap Haïtien, the country's second-largest city, located in the North. Compared to other regions, the Nord Department enjoys good coverage and access to care. All the principal health centers—now managed by the Ministry of Health and its partners—have a cholera treatment unit staffed by trained healthcare workers and are receiving support from other organizations, particularly in the regions that MSF has identified as priorities. 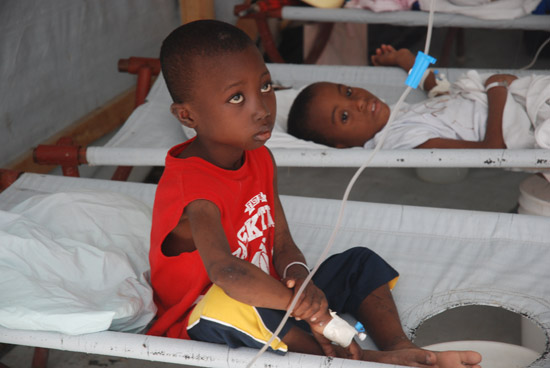 MSF treats a child with cholera in Port-au-Prince in October.

MSF has been working with health authorities in the North since the epidemic broke out last year, preparing them to take responsibility for managing cholera.

"It's been three months since we last worked directly in the health facilities," said Laurence Desvignes, MSF's coordinator in Cap Haïtien. "Health authorities in the North are managing the situation with our support and it's working."

This support takes the form of advice, monitoring, and training of Haitian medical and paramedical staff to ensure appropriate medical care in treatment centers. In addition, MSF provides equipment and medical supplies when inventories run out.

The Ministry of Health has also taken over responsibility for the cholera information campaign, which MSF launched last year. More than 800 community health workers have fanned out into the department. They educate residents on health and hygiene, set up and monitor health facilities in rural areas, treat water, and disinfect residences. More than 205,500 people, out of a total population of more than 823,000, have been trained during visits to homes, markets, schools, and churches.

The transfer of activities includes an emphasis on remote areas, where access to care poses the greatest problems. Oral rehydration points (ORPs)—small facilities in rural areas that provide patients with oral rehydration salts, thus reducing the distance to treatment centers—were set up using donated supplies. Nearly 300 ORPs are managed by community health workers across the department, as well as by MSF-trained volunteers in areas that are the most difficult to access.

The rainy season began in early October and a flare-up of cases was observed in the Cap Haïtien region, as in other areas of the country. Problems with sanitation and access to drinking water remain among the population's primary concerns as they battle the epidemic. However, other factors—specifically, behavioral—may be responsible for recurrent outbreaks.

Beliefs, such as voodoo, are deeply rooted in Haitian culture. "Like other illnesses, cholera is often seen as the result of an evil curse, not poor hygiene," Laurence Desvignes said. "Patient stigmatization is still quite profound, which leads some people to seek care outside the area where they live, thus delaying treatment. We have also noticed that people have stopped following certain basic rules of hygiene. They have a hard time changing their habits over the long term."

According to the MSF coordinator, the situation is not ideal, but the health authorities are handling it. "During a recent cholera flare-up resulting from poor hygiene in one of the city's neighborhoods, health authorities in the North took action immediately to disinfect a source of contaminated water and to instruct residents on protecting waterways and using latrines," Desvignes said. "They responded quickly and did what needed to be done. That's encouraging."

MSF will continue to assist the Ministry of Health by making regular visits and providing technical support for the upcoming construction of a new treatment center in Cap Haïtien. MSF also has enough emergency supplies to treat 5,000 people and, if an outbreak exceeds the health authorities' current capacity, has stored the necessary supplies on site so that it can respond quickly.

One year ago, on November 5, 2010, MSF deployed an emergency team to respond to the cholera epidemic spreading in Cap Haïtien.At the time the first cases were detected, health authorities were unable to intervene and did not have adequate supplies to respond to an epidemic of that scale. Within a few weeks, MSF opened 19 cholera treatment centers and 90 ORPs in isolated areas, providing thousands of patients with access to care. Between November 2010 and September 2011, MSF treated more than 31,750 cholera patients in Nord Department.