MSF has treated more than 12,000 people for cholera and cholera-like symptoms, and the organization is anticipating that the spread of the bacteria will not soon abate. 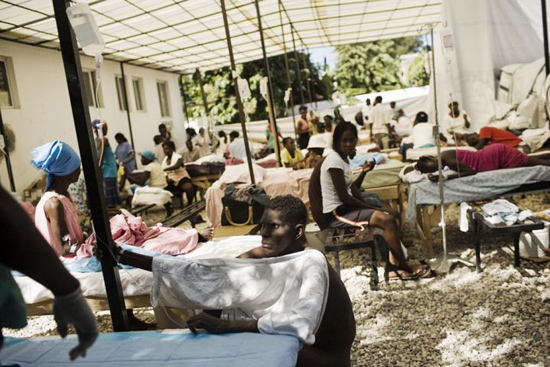 People infected with cholera being treated by MSF on the grounds of St. Nicholas Hospital in Saint Marc.

To date, MSF has treated more than 12,000 people for cholera and cholera-like symptoms, and the organization is anticipating that the spread of the bacteria will not soon abate. MSF has deployed more than 150 international staff who are working alongside 1,000 Haitian staff to run cholera treatment programs, maintaining more than 1,000 beds of hospitalization capacity across the country.

While continuing to scale up its ability to treat growing numbers of patients, MSF is also urging other organizations and actors who have the capacity to get more involved in the medical, hygiene, water and sanitation, and communications efforts needed to counteract outbreak. 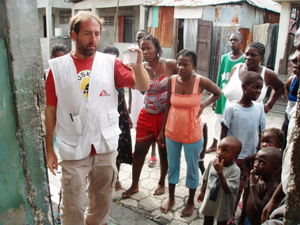 An MSF water-and-sanitation specialist using a chlorine testing kit to test the water in Cite Soleil neighborhood of Port-au-Prince.

"Simply put, other actors need to get more involved because the needs are far too great to be covered solely by the organizations currently working to prevent and treat cholera,” said Stefano Zannini, MSF Haiti Head of Mission. "Both the short-term and long-term forecasts indicate that this situation will get worse, possibly far worse, before it gets better.”

According to the Haitian authorities, the official death toll is already nearing 1,000. In some places in the north, and elsewhere in the country, hospitals continue to admit suspected cholera cases above their bed capacity. Plans to ensure access to clean drinking water, waste management, and safe burials are yet to be developed or implemented, undermining effective prevention and treatment efforts.

“When people have finished their treatment and they leave the centers, they go back to what is potentially a cholera infected area,” said Zannini. “Here in Port-au-Prince, 1.4 million people are still living in camps, where hygiene, sanitation, and clean water are often scarce. These 1.4 million people depend mostly on humanitarian aid groups for clean water. Infrastructure is weak and it’s very difficult to get medical aid and water to all of these people.”

The situation in the north of Haiti remains extremely serious. MSF teams working in the region are being overwhelmed by the needs, as many new patients arrive to facilities in Cap Haitien, Port de Paix, Gonaives, and Gros Morne every day. Fears persist in the communities, including in Port-au-Prince, over the presence of cholera treatment centers (CTCs) close to the origination of cases, in spite of their importance to immediate lifesaving measures against the epidemic.

“Minutes can make a huge difference in cholera treatment,” said Danielle Ferris, MSF project coordinator in Martissant, one of the biggest slums in Port-au-Prince. “We had one little girl who was about two years old. Her family had traveled in the Artibonite region and she was very ill when she came in. We treated her by intravenous drip, and about four hours later she was so much better—alert and moving around—which just shows how treatable cholera is if you’re treated quickly enough.”

In the lower Artibonite region, the epicenter of the outbreak, MSF teams in Petite Riviere and St. Marc are still very busy. While there are some indications of the epidemic possibly stabilizing in the area, the CTCs in both places are at capacity. The caseload in Dessaline, however, is still increasing; 177 people were admitted on Friday and a 280-bed capacity facility is being built. In general, as in the north, it is still difficult to reach remote areas to offer treatment where it is needed. MSF has resorted, in some cases, to dropping materials from helicopters to support some local health centers.

In Port-au-Prince, the picture remains chaotic and troubling. The Cite Soleil neighborhood, a sprawling slum, is essentially the frontline of the outbreak in the capital. Efforts are underway to increase admissions to 250 per day at the MSF-supported Haitian Ministry of Health’s Choscal Hospital. People presenting with severe symptoms are transferred to CTCs in MSF structures in the nearby Sarthe and Tabarre neighborhoods. Teams are also looking for another place to construct a cholera treatment unit (CTU) in the neighborhood.

“We have very little space,” said Javid Abdelmoneim, an MSF doctor working in Cite Soleil. “With the permission of the hospital director we have taken over the car park of Choscal Hospital and set up the cholera treatment tent there. That was the last available space that we could use in the hospital that is isolated from the rest of the hospital, which is crucial to maintaining an infection barrier.”

Tremendous risk factors remain, such as the fact that most water in Cite Soleil is not chlorinated. In Cite Soleil, MSF provides approximately 280,000 liters of water per day, enough drinking water for an estimated 14,000 people but far below the requirements of the neighborhood’s inhabitants. Few organizations are filling the gap.

Already, MSF’s CTCs in Sarthe (70 beds), Tabarre (200 beds), and Carrefour (112 beds) are occupied. New facilities are planned for Sarthe (another 320 beds), St. Louis (18 beds), and Delmas 33 (100 beds). Teams have also developed a plan to increase capacity at the facility in Bicentenaire, from 75 beds to upwards of 370 beds, if necessary. Fortunately, for the moment, the situation in the south of the country has not yet become as serious. MSF teams in Leogane are seeing an average of one patient per day, and staff in Jacmel have not received any patients as of yet.

MSF cargo planes arrived in Haiti on Sunday and Monday to bolster supplies.

All other MSF facilities and services are running normally during the emergency cholera response. MSF has more than 3,000 Haitian and international medical and non-medical staff providing assistance to the population through its ongoing programs. They run seven private, free of charge, secondary-level care hospitals and support two Ministry of Health structures in Port-au-Prince, accounting for nearly 1,000 hospital beds in the capital city. These facilities provide emergency, trauma, obstetrical, pediatric, maternal, and orthopedic care services. Mental health care and treatment and counseling for victims of sexual violence are also provided by MSF.

Outside the capital, MSF supports Ministry of Health hospitals in the cities of Leogane and Jacmel with nearly 200 beds of patient capacity. MSF opened a private 120-bed container hospital in Leogane in October.

From January 12 to September 30, MSF has treated more than 339,000 people, performed more than 15,700 surgeries; and delivered over 9,900 babies. MSF also provides primary medical care and relief supplies to displaced persons living in various camps in Port-au-Prince through mobile and fixed clinics, and is carrying out water-and-sanitation services to displaced persons in the Cite de Soleil slum.