To date, 84,500 people suffering from cholera, or 57 percent all cases reported nationwide, have been treated in MSF or MSF-supported structures. 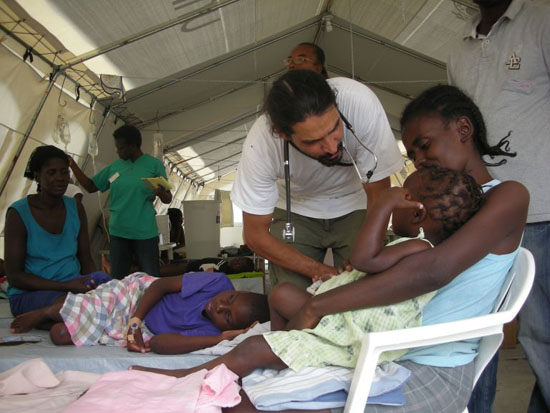 MSF staff at a Cholera Treatment Center in Port-au-Prince tends to a child who presented with symptoms of cholera.

As 2011 begins, Doctors Without Borders/Médecins Sans Frontières (MSF) continues to bolster its response to the ongoing cholera epidemic in Haiti.

In the midst of uncertainty over the impending recount of votes from the recent Haitian presidential elections, MSF is making every effort to continue its lifesaving work. Recent demonstrations and sporadic violence coincided with a spike in cholera cases in the capital, Port-au-Prince, as people were unable to access treatment.

Currently, MSF is operating or supporting almost 50 Cholera Treatment Centers and Cholera Treatment Units across the country. It is also providing supplies for oral rehydration points in areas where the epidemic has yet to take hold in significant numbers, in remote regions or villages that are underserved by health posts.

So far, 84,500 people suffering from cholera have been treated in MSF or MSF-supported structures. That represents 57 percent of all cases nationwide, based on the latest figures provided by Haiti’s Ministry of Health, which has reported that a total of 147,787 patients have contracted cholera since the outbreak began last October and more than 3,330 people have died from the disease.

MSF also continues to provide essential medical services at its seven free-of-charge secondary-level care hospitals and at two government hospitals it supports in Port-au-Prince. MSF has been providing high-risk obstetric services, emergency care, trauma care, and burn treatment. Outside the capital, MSF runs a hospital in Léogâne and supports another public hospital in Jacmel.

MSF has roughly 7,900 Haitian and 430 international staff maintaining these existing programs and responding to the cholera emergency.