Two years after the earthquake, the health care system in Port-au-Prince and its surrounding areas is still in disarray. Most Haitians still lack proper access to emergency care. 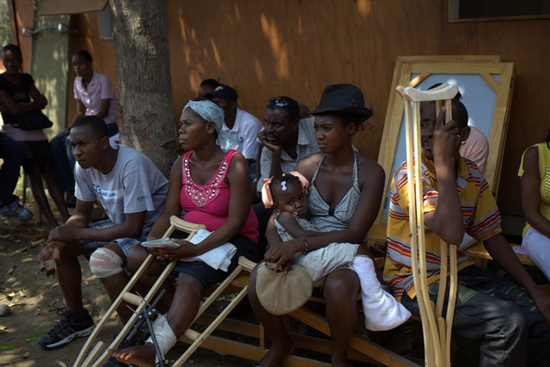 Patients wait for care at MSF's hospital in the Drouillard section of Port-au-Prince.

January 12, 2010, will forever remain engraved in Haiti's collective memory. Nearly everyone in the country lost a relative, friend, or neighbor in the earthquake that hit that day, and many survivors continue to suffer physical or psychological after effects. The piles of rubble and gaping holes in the streets of Port-au-Prince show that the city itself still bears the scars as well.

Doctors Without Borders /Médecins Sans Frontières (MSF) was working in Haiti before the disaster and lost 12 staff members in the earthquake. Two MSF hospitals—the La Trinité trauma center and the Solidarité OB/GYN clinic—were destroyed. In the two years that have followed, MSF supported a Ministry of Health hospital in the Cité-Soleil slum and built four emergency hospitals in the area affected by the earthquake, an area more than 2 million people call home.

Last April, MSF opened a 130-bed referral center for obstetrical emergencies in Port-au-Prince’s Delmas 33 neighborhood. It accommodates pregnant women who face complications that could threaten their lives or those of the fetuses. Since the center opened, medical personnel have performed 1,432 operations and assisted in the birth of 4,600 babies. One of the newborns was Esther, whose mother, Belgarde, says: "I lost my first three children right away after giving birth. The last one was premature, too, but thanks to the care she's received here, I am hopeful that I'll be able to take her home soon."

MSF opened the Drouillard hospital in the northern section of the capital on May 9, 2011. This 208-bed facility replaced the temporary inflatable tent hospital that was established on the sports field at the Saint-Louis de Gonzague School after the earthquake. Its teams deal with medical and surgical emergencies and major burn cases, and also provides physical therapy and mental health follow-up care. On average, 55 new patients are treated and 20 surgeries are performed every day. According to medical director Félix Konan-Kouassi, "The earthquake is no longer responsible for the cases we see today, which have to do primarily with road or household accidents and with violence. On the other hand, we do observe increased psychological vulnerability since the disaster. Patients find it more difficult to bear up under additional trauma, such as an attack or an accident."

Chatuley Hospital is in Léogâne, which is west of the capital but was close to the epicenter of the earthquake. Nearly 80 percent of the city was destroyed. Initially a temporary installation, the hospital now operates out of containers that house 160 beds. It remains the immediate region's only hospital, treating emergencies and providing OB/GYN and pediatric care. In 2011, the medical staff treated 73,741 patients, performed 3,755 operations, and assisted at 4,501 births.

Finally, in the industrial area of Tabarre, east of Port-au-Prince, construction teams are putting the final touches on the Nap Kenbe (“hope" in Creole) center, which is scheduled to open in February 2012 as an additional resource for Haitians who need free medical care in the metropolitan area. Composed of 268 modular units and 108 beds, it will provide emergency trauma and abdominal surgery.

MSF is also continuing to provide care at a referral and emergency center in Martissant, which opened in late 2006 and treats an average of 4,370 patients each month.

"Much of the capital's health care infrastructure disappeared on January 12, 2010—and it was limited and not even fully operational prior to that date," says Gérard Bedock, MSF's head of mission in Haiti. "The earthquake revealed and exacerbated the shortcomings of Haiti's health care system. It will take a long time to rebuild. In the meantime, we are working to fill the health care gaps to the extent possible, while responding to potential new emergencies, such as cholera."

After a major cholera epidemic struck Haiti in late October 2010, more than 500,000 cases were recorded in the country. "Hundreds of thousands of people still live under terrible conditions in makeshift camps," says MSF's medical coordinator, Wendy Lai. "Access to drinking water and sanitation is very limited throughout the entire country, particularly in rural and remote areas. This situation promotes the spread of infectious disease. While the number of new cases of cholera has fallen considerably, we still see several hundred each week and the risk of seasonal resurgence remains very high. We must remain extremely vigilant."

MSF Funding for Haiti After the Earthquake

MSF launched its first projects in Haiti in 1991, carrying out emergency programs during natural disasters and crisis situations.

Immediately following the January 2010 earthquake, the organization undertook the largest emergency intervention in its history, treating 358,000 people, performing 16,570 operations and assisting at 15,100 births over a 10-month period.

During the cholera epidemic that began in October 2010, MSF set up operations on an unprecedented scale. At the height of the crisis, some 4,000 health care providers were working at more than 75 facilities in Haiti. Nearly 170,000 patients with cholera symptoms were treated between October 2010 and November 2011, and MSF has a large-scale emergency preparation and rapid treatment plan in place in case of another widespread outbreak.

* 2011 consolidated earmarked fundraising numbers for Haiti are not yet available. They will be much lower than in 2010 and do not cover all 2011 expenses that were completed with private MSF funds.