Following the January 2010 earthquake MSF launched the largest emergency operation in its history. A year and a half later, MSF?s projects are adjusting to changing situations. 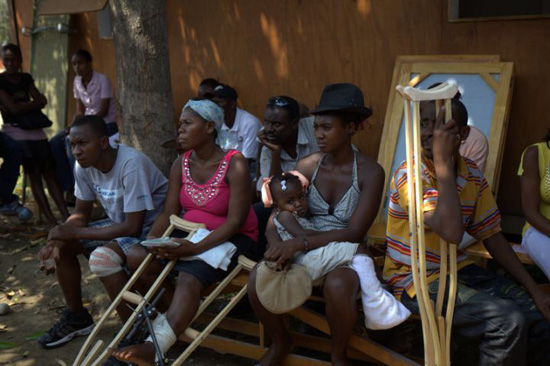 Patients wait for the physiotherapy in MSF's new hospital in the Drouillard neighborhood of Port-au-Prince.

Thirty-five seconds. That’s all it took for an earthquake to shatter the lives of millions of Haitians on January 12, 2010. Medical needs were immediate and massive. More than 300,000 people were injured and 1.5 million left homeless.

Then in October, a cholera epidemic struck, with 250,000 cases in the first five months. MSF treated almost half of these patients.

Today, the epidemic is resurgent and hurricane season is approaching. In response to the situation on the ground, Doctors Without Borders/Médecins Sans Frontières (MSF) is reorganizing its services in Haiti. The needs remain high. In many places where MSF works, medical care was insufficient even before disaster struck.

“MSF’s Trinité trauma hospital collapsed in the quake, killing seven patients and two of our colleagues,” said MSF Emergency Director Dr. Pierre Wagner. “The others immediately set to work to help victims that were arriving from everywhere.

“We quickly resumed work in inflatable tents set up on a school sports field. There we performed more than 16,000 consultations and 9,000 surgeries. But it’s time to leave this provisional facility. The school wants its field back.”

Dr. Wagner and his team are transferring the emergency services that were based at the inflatable hospital to a new MSF hospital—a 170-bed facility that will improve access to free medical services for people living in neighborhoods like Cité Soleil, the largest slum in the city. MSF has been supporting the Choscal public hospital in Cité Soleil since 2004, but “we’re going to withdraw from Choscal so that the Ministry of Health can take over again,” said MSF Head of Mission Gaëtan Drossart. “We’re also building a new 114-bed hospital to the east of town.”

In an industrial park in the neighborhood of Tabarre, 100 workers began excavation in November and will assemble the 268 modules that make up the facility before it opens in the fall.

Adjusting to a Changing Situation 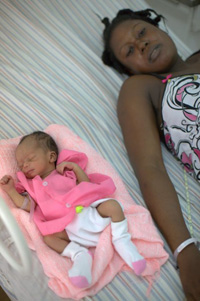 A mother and newborn rest at MSF's emergency obstetric hospital in the Delmas 33 neighborhood of Port-au-Prince, one of five MSF hospitals in Haiti.

MSF has offered emergency obstetric care for pregnant women in Port-au-Prince since 2006. Even before the earthquake, Haiti had the highest level of maternal mortality in the western hemisphere.

“We don’t handle normal births because there are already enough places for that,” said Dr. Boucher. “We take complicated cases like eclampsia and hypertension; cases where the life of the mother or the child is in danger.”

When the earthquake struck, MSF teams already in the country immediately started giving aid, and reinforcements soon arrived. Staff began work in the densely populated southern suburbs of Port-au-Prince, turning a dental clinic into a 80-bed emergency facility with a focus on surgery and pediatric care. That clinic is set to close in late July with the opening of MSF’s new, larger hospitals.

“In Léogane, the epicenter of the earthquake, we found an enormous need for medical services,” said Gérard Bedock, an MSF coordinator. “Eighty percent of the buildings had been destroyed and not one health center was functioning.”

MSF set up a hospital beneath some basic tents in Léogane a few days after the earthquake; it later grew to 150 beds, specializing in obstetrics, pediatrics, and emergency trauma cases.

The cases that staff are now seeing are no longer linked to the earthquake; the facility has become a community referral hospital and MSF aims to hand it over to the Ministry of Health.

All of MSF’s new facilities were built in coordination with the Haitian health authorities, and their design has taken earthquakes and hurricanes into account.