Haiti: MSF Steps Up its Cholera Response in Port-au-Prince

MSF is scaling up capacity to receive people in the Haitian capital presenting with cholera-like symptoms, aiming to have 1,000 beds available in the city in the coming days. 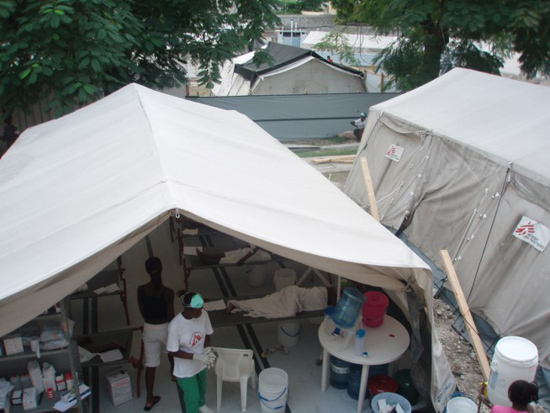 An MSF cholera treatment center in the Carrefour neighborhood of Port-au-Prince.

Doctors Without Borders/Médecins Sans Frontières (MSF) continues to step up its response to the growing number of patients in Port-au-Prince experiencing the clinical symptoms of cholera.

As is the case in other MSF health facilities, rising numbers of patients have been admitted to Choscal Hospital, a Haitian Ministry of Public Health hospital in Cité Soleil, due to acute watery diarrhea and vomiting—both of which are symptoms of cholera infection. The MSF-supported hospital has received hundreds of cases over the past five days. “Yesterday we recorded 216 separate cases of cholera arriving at the hospital, while the total number recorded just 5 days ago was 30,” said Stefano Zannini, MSF head of mission in Haiti, on Thursday. “Patients are coming from everywhere, throughout the city, slums and wealthier areas.”

Onset is often very sudden. “I was just preparing to leave my house when I started to vomit,” said a man named Julien, a 43-year-old father who arrived at the hospital less than 12 hours after his symptoms struck. “I thought it would stop, but instead it got worse. Ever since, I’ve not been able to stop going to the bathroom.” By the time he reached the hospital, he was already too weak to stand and could barely talk.

“I’m ashamed to have caught a disease for which the first line of defense is good hygiene,” he says with his head down. Nonetheless, his wife, stranding at his bedside, was rejoicing that he could speak again. “I had lost all hope,” she said. “This hospital saved my husband.”

The cholera treatment unit at Choscal was established to stabilize patients like Julien, according to Juliette Olivier, an MSF physician. “Following admission, patients undergo rapid treatment. They are assessed and put on rehydration.”

Patient by patient, the response is straightforward, as it was in Julien's case. The larger picture right now is more troubling, however. “The climate has been favorable for the development of an epidemic," says Olivier. "Nonetheless, we didn’t expect it to be cholera. But although the medical situation continues, we remain mobilized to help the population. This is why the staff is educating those individuals who will survive, even as we provide care.”

MSF currently has 165 international staff members and more than 400 Haitian staff members working on cholera treatment in the country. MSF has been assisting with cholera treatment in several towns in the north of the country and is supporting treatment centers in Gonaives and Gros Morne. A 20-bed cholera treatment center has also been set up in Leogane, where MSF already runs a hospital. And in Port-au-Prince, MSF teams are scaling up their capacity to receive people presenting with cholera-like symptoms, aiming to have 1,000 beds available in locations throughout the city in the coming days.

“We’re trying to explain that cholera can kill, but at the same time, it’s a disease that you can treat quite easily,” said Zannini. “It’s extremely important that the patient arrives as soon as possible to the medical facility in order to be treated.”

He continued: “Cholera treatment centers, where patients can be isolated, are critical for effective treatment. The access points are controlled so that whoever enters or leaves is sprayed with chlorine to disinfect properly and prevent further spread of infection. Depending on the number of beds, each treatment center can take up from 50 meters to one hectare of space. Each patient is given a bed and usually does not stay for longer than two days.”

Already, however, the case load is threatening to overwhelm the facilities MSF and other actors have available, particularly since space has been at such a premium since the earthquake destroyed so much of the city’s infrastructure and forced so many displaced people to try to find shelter wherever they could. “We are really worried about space,” said Zannini. “If the number of cases continues to increase at the same rate, then we’re going to have to adopt some drastic measures to be able to treat people. We’re going to have to use public spaces and even streets. I can easily see this situation deteriorating to the point where patients are lying in the street, waiting for treatment.”