Surgical units set up by MSF in Port-au-Prince are working around the clock to treat the vast numbers of patients with injuries from Tuesday’s earthquake. Experienced MSF medical staff say they have never seen so many serious injuries. 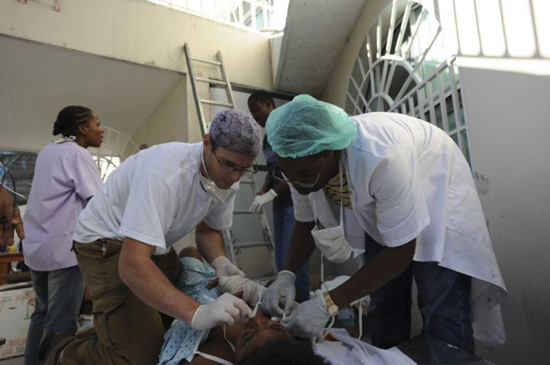 MSF staff perform surgery in a makeshift operating theatre on the grounds of La Trinité trauma hospital in Port-au-Prince.

Doctors Without Borders/Médecins Sans Frontières (MSF) surgical units in Port-au-Prince continue to work around the clock to treat the vast numbers of patients with serious injuries from the January 12 earthquake. Prioritizing the most serious cases, the teams have been performing caesarian sections and amputations. Experienced MSF medical staff say they have never seen so many serious injuries.

An MSF surgical team that relocated to Chocsal Hospital after its facility in Martissant was badly damaged has been working non-stop since early on Friday. At Trinité trauma hospital, where the team is treating people under canvas on the grounds of the medical facility that was hit by the earthquake, surgery has been taking place in an improvised operating theater. In Carrefour, a district that was very badly affected, MSF has just started working in a hospital with two operating theatres.

One of MSF’s operational coordinators in Port-au-Prince, Hans van Dillen, says there was an immediate reaction when people found out that we were starting medical activities in Carrefour. People began crowding around the entrance. Patients are being brought in by wheelbarrow and on others' backs. There are other hospitals in the area but they are already overflowing with injured people and have limited numbers of Haitian staff or supplies.

The struggle to find more buildings that could be used for MSF’s medical work is continuing, as are the efforts to get more medical staff and supplies into the country. The major difficulty here is the bottleneck at the airport, which has turned away a number of vital cargo flights. Lack of authorization to land at the airport has already caused a 24-hour delay of the planned arrival of MSF’s much needed inflatable hospital.

MSF has managed to get more than 70 additional staff into Port-au-Prince, mostly through neighboring Dominican Republic. They are beginning to take some of the strain off the teams who were already there when the quake struck.

It has become clear that a number of our Haitian staff did not survive the devastation. MSF is still trying to confirm the whereabouts of others and is increasingly concerned about their welfare.

The teams say that the lack of food and water is also of serious concern and is contributing to tension in the city. There has been little sign of significant aid distribution and there are increasing reports of looting, although not accompanied by violence.

MSF’s activities are rapidly scaling up and the next move will be to assess different parts of the city, where needs are expected to be equally high. To help address the massive scale and variety of the assistance required, MSF hopes to start other medical activities as soon as possible, including mobile clinics where there are no functional health structures, and mental health for people who have been traumatized.