Haiti: MSF Teams Set up Clinics to Treat Injured After Facilities Are Damaged

The first reports are now emerging from MSF teams who were already working on medical projects Haiti and have treated hundreds of people injured in the quake. "The situation is chaotic," said one senior staff. "I visited five medical centers, including a major hospital, and most of them were not functioning." 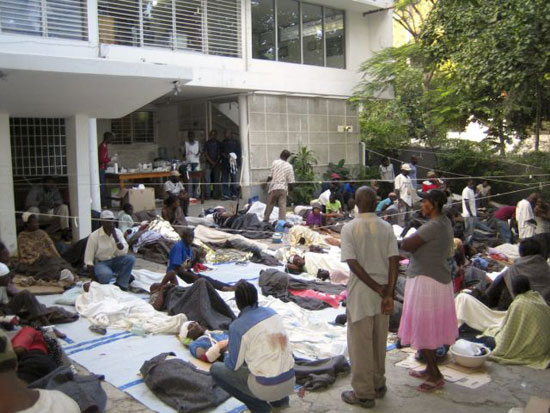 People gather outside a damaged MSF office in Port-au-Prince to receive help after a 7-magnitude earthquake hit the capital city on January 12.

The first reports are now emerging from Doctors Without Borders/Médecins Sans Frontières (MSF) teams who were already working on medical projects Haiti. They are treating hundreds of people injured in the quake and have been setting up clinics in tents to replace their own damaged medical facilities.

The Martissant health center in a poor area of Port-au-Prince had to be evacuated after the earthquake because it was damaged and unstable. The patients are now in tents in the grounds and the medical staff have been dealing with a flow of casualties from the town. They have already treated between 300 and 350 people, mainly for trauma injuries and fractures. Among them are 50 people suffering from burns—some of them severe—many of them caused by domestic gas containers exploding in collapsing buidings. At the Pacot rehabilitation center another 300 to 400 people have been treated. In one of MSF's adminstrative offices in Petionville, another part of Port-au-Prince, a tent clinic there has seen at least 200 injured people. More are getting assistance at what was the Solidarite maternity hospital, which was seriously damaged.

One of MSF's senior staff, Stefano Zannini, was out for most of the night, trying to assess the needs in the city and looking at the state of the medical facilities. "The situation is chaotic," he said. "I visited five medical centers, including a major hospital, and most of them were not functioning. Many are damaged and I saw a distressing number of dead bodies. Some parts of the city are without electricity and people have gathered outside, lighting fires in the street and trying to help and comfort each other. When they saw that I was from MSF they were asking for help, particularly to treat their wounded. There was strong solidarity among people in the streets."

Another MSF coordinator there, Hans van Dillen, confirmed that Port-au-Prince was quite unable to cope with the scale of the disaster. "There are hunderds of thousands of people who are sleeping in the streets because they are homeless," said van Dillen. "We see open fractures, head injuries. The problem is that we can not forward people to proper surgery at this stage."

So many of the city's medical facilities have been damaged, healthcare is severely disrupted at precisely the moment when medical needs are high.

MSF is also working to get more staff into the country. Around 70 more staff are expected to arrive in the coming days. MSF is sending out a 100-bed hospital with an inflatable surgical unit, consisting of two operating theaters and seven hospitalization tents. Nephrologists will be sent as part of the team in order to deal with the affects of crush injuries. However, transport links are difficult and it is not yet clear whether supplies and medical staff will have to go in through neighboring Dominican Republic.

MSF is also concerned about the safety of some of its own staff. There are 800 of them and not all have yet been accounted for because of the poor communications and general disruption.