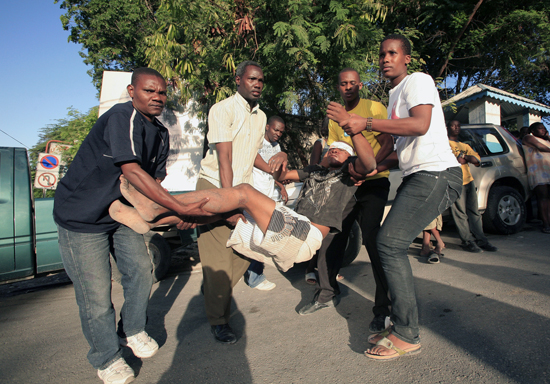 Residents move a man injured during the earthquake that hit Port-au-Prince on January 12. 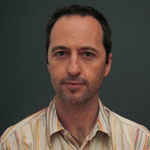 Dr. Greg Elder is the deputy operations manager for Doctors Without Borders/Médecins Sans Frontières (MSF) in Haiti. Here he provides an update on the situation on the ground in Port-au-Prince, Haiti, 24 hours after a 7.0-magnitude earthquake struck the country leaving tens of thousands wounded and unknown number of dead.

Can you tell us what the situation is like on the ground since the earthquake struck?

What we do know—and our team has been able to paint a picture for us as to what happened during the evening—is that it was chaotic. People were on the streets, they didn't know where to go, where to turn for help. We had to basically move through the streets on foot in order to assess the extent of the damage to our own health structures and also to other health structures so that we could see whether or not there was going to be any functioning health services today.

Most people are going to be sleeping outside for fear of being inside the damaged buildings, and this includes much of our staff members who are living outside with the population.

We have three hospital structures—a trauma center and a maternity hospital included—and nearly 800 staff on the ground in Port-au-Prince. Those facilities structurally had been so badly damaged we had to evacuate patients out of those facilities onto the neighboring grounds. But we’ve been able to set up some tented first-aid centers during the day today. Those centers obviously have been overwhelmed, exhausted already. Our teams have treated more than 1,000 wounded people, including open fractures and other injuries, at our makeshift facilities in the capital.

In Port-au-Prince the health system is rather fragile and the hospitals we visited during the evening and during the day on Wednesday have been overwhelmed. So we are trying to fill a gap in the short-term and then reinforce our teams by dispatching another 70 international staff over the next few days, including several surgical teams. A charter flight will leave on Thursday with all the equipment necessary to establish a 100-bed inflatable tent hospital with two operating rooms. Two surgical teams are leaving from Miami, Florida, on Thursday morning to provide some additional support on the ground.

Can you give us a sense of the scope of this damage?

Port-au-Prince is a very congested city with a high population and a relatively poor infrastructure. Before the earthquake, Port-au-Prince, a city of 3.5 million people of which half live in slums, had 21 public health facilities including four hospitals. The public health system was marginally functional before this disaster and is not able to cope with an emergency of this magnitude, and it will depend on international support and international organizations to be able to fill the gap.

So it's a really catastrophic event where absolutely no one knows really what the scope of this is in terms of casualties and fatalities. It will be some time before anyone can tell that because people are buried under the rubble.

Watch Dr. Greg Elder discuss how MSF is responding to the earthquake in Haiti on PBS NewsHour from January 13: