MSF teams in Port-au-Prince are still under great pressure. While providing emergency care to as many people as possible, they are also searching for additional facilities that can serve as operating theaters and trying to get in more supplies. At the same time, MSF has been travelling to areas outside of the city and is about to extend the medical care to the people there. 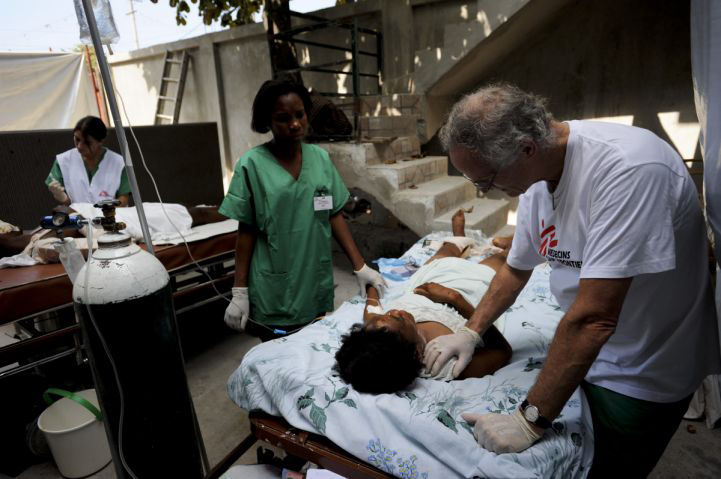 Doctors tend to a patient at the makeshift treatment center MSF set up in the Carrefour section of Port-au-Prince. MSF teams continue to seek out facilities in which they can provide emergency care to those who need it most. 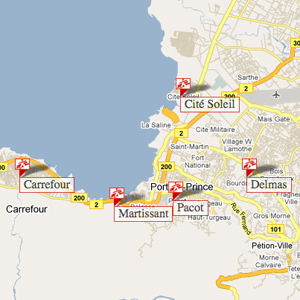 MSF is providing surgical and first-aid assistance in several areas of Port-au-Prince and is assessing medical needs outside the capital as well. Click on the map for a full-page view of where MSF is curently working.

Doctors Without Borders/Médecins Sans Frontières (MSF) teams in Port-au-Prince are still under great pressure. While providing emergency care to as many people as possible, they are also searching for additional facilities that can serve as operating theaters and trying to get in more supplies. At the same time, MSF has been travelling to areas outside of the city and is about to extend the medical care to the people there.

MSF has given primary care to an estimated 3,000 people in the capital and performed more than 400 surgeries. The most common and most serious injuries are open fractures, head injuries and infected wounds that need amputation. Marie-Christine Ferir, an MSF Emergency Coordinator, says that the overall situation is still very difficult and that injured people in the city are still waiting too long to receive care. "The hospitals that remain standing are full. Although there is a slight increase in surgical capacity in Port-au-Prince with MSF expanding its capacity and other organizations arriving, it is still far from enough to absorb the number of patients in desperate need of surgery. We are having to focus on people with very serious injuries, where surgical interventions can save lives."

MSF has begun to build an inflatable hospital with two operating theaters and 100-bed capacity in an open field not far from the airport. Though its arrival was delayed by air traffic congestion, the parts are finally arriving in Port-au-Prince. Some came on a plane that was able to land in the capital on Sunday while the rest was transported overland from the Dominican Republic. MSF will have this facility operational as soon as possible.

Other MSF teams have traveled to areas outside of the city and have found very substantial damage and large numbers of injured people, some of whom fled the capital looking for treatment, food, and shelter. In Jacmel, a town on the southern coast, near earthquake’s epicenter, around 60% of all buildings were destroyed. Jacmel’s hospital had partially collapsed but MSF determined that the operating theatre was still usable and will begin working there as soon as it can. The roads are blocked, however, so supplies must be brought in by helicopter.

In Saint-Marc, some 24 miles (40 km) north along the coast, the damage is not as severe but large numbers of people from Port-au-Prince have gathered in town. MSF expects to set up another medical center there soon, much like the one it recently opened in Léogâne, a town west of the capital that was also serious damaged.

In general, supplies are a great concern. MSF teams have used up large quantities of materials and medicines over the past six days and replacing them is proving an immense challenge. Flights into Haiti are still very restricted. A cargo plane due to arrive yesterday with additional stocks was diverted to the Dominican Republic; the roads from there are slow and congested.

MSF has nonetheless been able to bolster its staff on the ground. More than 130 international staff have traveled to the country since the quake. They are reinforcing the remarkable efforts made by teams that were on the ground on January 12, particularly the Haitian staff, many of whom have been working around the clock despite having lost numerous family members and colleagues. MSF is still trying to account for all of its staff members. We know that some of them did not survive last week's events.