Haiti: Struggling to Survive After the Storms in Gonaives

"At the latest estimate, there were something like 60,000 people living without a house. All the bridges have collapsed around the town, and the roads are still impassable. Inside the town itself you can drive to some places, but to get to the town from outside is impossible—even big vehicles with caterpillar tracks can't get through." 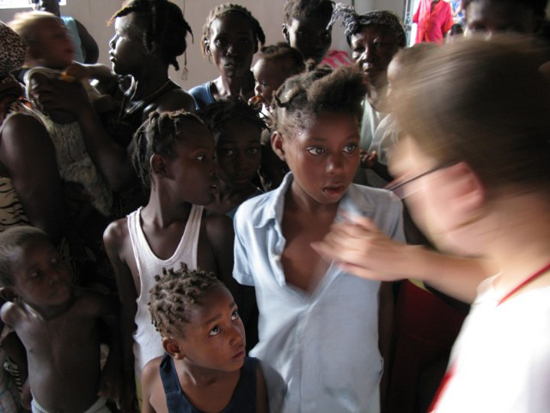 An MSF team conducts a mobile medical clinic in Gonaïves.

"It's a mess—it's not a town any more, it's really a mess," said Max Cosci, head of the Doctors Without Borders/Médecins Sans Frontières (MSF) emergency response to the massive flooding in Gonaïves. "There was one man who died before my eyes because he was diabetic; the flood had washed away all his medicines and so he couldn't take his insulin. His neighbors called us, but when we arrived he was already in a coma and it was too late for us to do anything—he just died. It's dreadful, and it's happening all around.”

Between August 25 and September 1, Hurricane Gustav, Tropical Storm Hanna, and Hurricane Ike battered Haiti in quick succession. MSF sent an emergency team made up of five medical staff, three logisticians, and three water and sanitation experts to Gonaïves, a town in the north of Haiti that had been particularly badly hit. Max Cosci describes the situation. 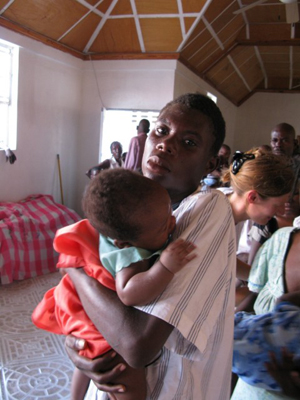 A father holds his child at an MSF mobile clinic in Gonaïves.

Around 200,000 people live in Gonaïves, and about 80 percent of the town has been submerged; there's only a small hilly part that has remained dry. Most of the houses here are small shacks with corrugated iron roofs and you cannot live in them any more because they're totally flooded. There's a big part of town that's completely gone, and one of the rivers has broken its banks and is constantly flushing water through the town, so you permanently have at least half a meter of water everywhere. It's still raining here, and it just takes an hour of heavy rain to increase the flood level rapidly.

At the latest estimate, there were something like 60,000 people living without a house. All the bridges have collapsed around the town, and the roads are still impassable. Inside the town itself you can drive to some places, but to get to the town from outside is impossible—even big vehicles with caterpillar tracks can't get through.

So for more than three weeks the only way to get there has been by helicopter or boat. I was in the helicopter when we arrived on the first day. We took an ambulance that was still functioning and searched the town for a dry place to set up a clinic or a hospital or somewhere where we could provide medical care for the people who needed it. It seemed like we were the only doctors in town.

While we were looking for a suitable place, people started coming to us with their friends and family who had been injured in the storm. They were opening the doors of the ambulance and just putting in people with fractured limbs and open wounds. 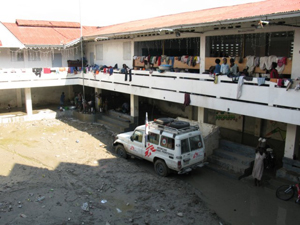 An MSF vehicle is parked outside of a shelter in Gonaïves where displaced people have gathered and where MSF is conducting a mobile clinic.

The first place we found was Rabouteau hospital. It's the only functioning medical facility apart from a small suburban health clinic that's five kilometers (three miles) out of town. We had to do our best to create a space with good hygienic conditions so we could have somewhere to do surgery. On the first day, we did 110 consultations and carried out 16 surgical procedures. And then in the following days we also started doing mobile clinics in the main shelters where we found that most people had gathered together.

But there are around 140 or 150 principal shelters where people are living, so it's not easy to reach all of them—and people move from one place to another, so we don't always know where people are. It's very complicated. One of these shelters is the university. There's a huge concentration of people inside and a lot people living on the roof—probably 120 families—and they have nothing. So we are providing them with food and water and one of our mobile clinics goes there regularly to provide medical treatment.

The people here urgently need to find a better place to live, but no one wants to abandon the town. People are frightened that someone will break into their house and steal their remaining possessions—or worse, that someone will occupy the house and they will lose their home. So nobody wants to go too far away. They prefer to live in the town, near their house, even if it means living in cramped, unhygienic conditions, so that they can control the few things they still have. And this makes the logistics extremely difficult.

One of the big problems is that there are no lavatories; they've been washed away. We cannot dig latrines because the ground is too waterlogged. We can only dig latrines in the small part of town that's dry, but people will not cross the entire town to go to the toilet. So most people are defecating and urinating in and around the shelters. 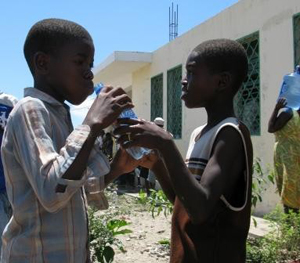 But by far the worst thing is that people have no water to drink. The water table is contaminated and most of the wells are not working. I have seen people starting to drink the dirty water. They filter it with their clothes, which gets rid of some of the mud, but this water that people are drinking is still brown and it's contaminated with excrement, urine, dead bodies of animals floating around. People are living right on the limit of what is possible.

We're doing what we can to provide clean water. We have pumps, generators, pipes, big water bladders; we've flown in about half a million Euros worth of water and sanitation kits from Europe so far. There are several wells, like the one at our base, that are providing a good rate of water flow. We pump the water into a 'bladder', a huge sterile plastic sac, treat it with chlorine, and transport it by truck to where it is needed in town. If you keep these pumps and chlorination going day and night, you can produce a lot of drinking water—we're producing about 150,000 liters a day. But getting the water where it's needed is a logistical nightmare.

It's not just Gonaïves—lots of smaller towns and villages have been flooded and roads everywhere have been cut, so people have been going without food. And the health centers that have not been damaged have run out of medicines and supplies. We have been making kits of essential drugs that we have been delivering by helicopter to health centers that are cut off. Then at least they can continue to function.