Nearly two weeks after the January 12 earthquake, the most pressing needs Doctors Without Borders/Médecins Sans Frontières (MSF) teams in Haiti face are patients who still require surgery and the growing number of patients who now require post-operative care. In Port-au-Prince, Choscal hospital in the Cite Soleil slum is still working around-the-clock, operating on an average of 20 to 25 people each day. In the town of Leogane, where MSF recently started performing surgeries in the local hospital, surgeons have completed 30 operations and at least 40 more are pending. In Martissant, where an operating theater opened almost immediately after the earthquake, 20 people with open fractures are awaiting treatment. 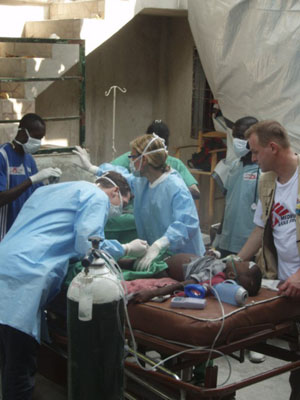 The need for surgery remains significant, while the need for post-operative care is growing.

Additionally, many of the people who’ve already had operations need some form of continuing care. The demand for beds and nursing resources is substantial. Therefore, MSF has started accommodating post-operative patients in a newly opened structure in the Bicentenarie section of Port-au-Prince and is preparing a former nursery elsewhere in the capital for the same purpose. Because of damage sustained during last week’s aftershock, patients who had been staying in Carrefour Hospital have been moved into a school building nearby. And on Monday, MSF opened the inflatable hospital it built in Delmas and began accepting patients and performing surgeries.

The new structure has space for around 180 patients. To some, being inside tents with soft and flexible walls is a relief. The memory of the earthquake and subsequent aftershocks still fresh in their minds, many patients were anxious about staying inside any building, fearing they, too, could collapse. “Patients feel less anxious here,” said Veronica Chesa, a nurse at what is now called the Saint-Louis Hospital. “They have less difficulty getting to sleep, and I noticed a decrease in the sedative drug requests.”

Understandably, the quake still weighs heavily on the minds and psyches of those who lived through it. MSF has expanded its mental health teams, assembling 18 psychiatrists and psychologists who can provide support and counseling to patients and medical staff alike. “The first step is to provide basic psychological information, to explain that they’re not mad even if they are stressed,” says Dr. German Casas, an MSF psychiatrist. “It’s normal to feel anxious,” he tells people. After experiences such as this, the brain can maintain the hyperalertness it feels is necessary to respond to any additional traumatic events. “It’s normal to be scared,” says Dr. Casas. “It’s useful to be scared. It protects you.”

Some needs involve more tangible items necessary for both physical and mental well-being. Over the past two days, for instance, MSF has distributed household essentials such as soap, buckets and blankets to more than 1,300 families in the town of Grand Goave, west of the capital. Similar distributions are scheduled for today in Jacmel, to the south, and, in the coming days, in Leogane.

Meanwhile, MSF’s nephrology team has administered kidney dialysis to more than 50 patients at Port-au-Prince’s General Hospital. Stefaan Maddens, an MSF nephrologist who worked with some of the earliest cases, hopes more people will come to realize that they, or their patients, can get dialysis. "The most important thing we have to do is communicate to all the surgeons, all the doctors that are working here in Port-au-Prince—not only MSF staff, of course, but to everyone now working with wounded patients—that there exists a possibility of treating renal failure,” Maddens says. “We have a total capacity of seven machines. This means we can do many patients a day. And for most of those people this is really life saving.”