Haiti: Surgical Teams Work Around the Clock; Assessments of Other Affected Areas Planned 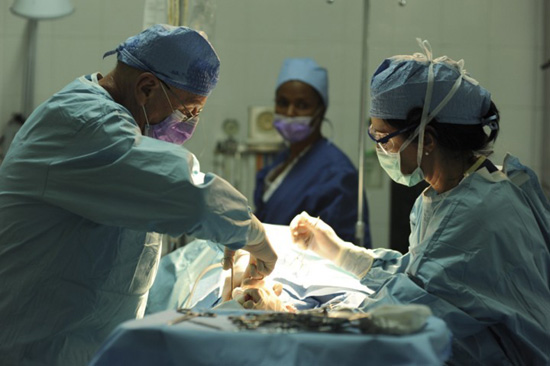 In Choscal hospital in Port-au-Prince MSF staff performed an amputation on a 12-year-old girl whose leg had been injured. Surgical staff have been working continuously since January 15.

On the fifth day of their response to the disaster in Haiti, the Doctors Without Borders/Médecins Sans Frontières (MSF) teams on the ground remain focused on trying to cope with the huge demand for lifesaving surgery. Teams are stretching their existing operating theatres to the limit by working around the clock. At the same time staff are trying to create more capacity by finding new functional facilities bringing in an inflatable hospital.

In its newly established hospital in the Carrefour district, an MSF surgical team has carried out 90 operations since beginning work there. Another team carried out 20 surgeries in a converted shipping container. More capacity is on its way, but the arrival of the inflatable hospital with its two operating theatres has been delayed because one of the planes carrying its components did not get permission to land at Port-au-Prince airport on January 16. The plane, which was re-routed to the Dominican Republic, was unloaded earlier today and its cargo is being trucked into Haiti. The plane carrying the other half of the hospital did land today in Port-au-Prince, but MSF is still concerned that the delivery of vital supplies are still being delayed.

The conditions in towns outside of the capital, some of which were even closer to the epicenter of the earthquake, are becoming clearer. An MSF team was to go today by helicopter to the town of Jacmel, on the southern coast of the island. Other staff have been to assess the needs in Léogâne, about an hour outside of Port-au-Prince. Thousands of people from the capital have fled to Saint ­Marc, an area less damaged by the quake; hundreds of injured people are in the hospital there.

Despite the transport problems, MSF has managed to get in more than 100 international staff into Port-au-Prnce to help the teams who were working there before the earthquake. The newly arrived staff include surgeons, anesthetists, nephrologists, and psychologists. Some had to come by road from the Dominican Republic, but MSF has managed to get four cargo planes carrying staff and supplies into Port-au-Prince since January 13.

The teams on the ground say that conditions are not improving yet and that the streets are full of desperate people. The lack of food and clean water is causing further stress.

MSF is still trying to get a full account of the whereabouts of its Haitian staff. We know that some have not survived the quake but communications remain difficult and we have not yet been able to trace all our colleagues.