Haiti: The Thinking Behind the Hard Choices

Two MSF surgeons talk about the hard choices they had to make in the aftermath of the earthquake in Haiti, which one said was like working in a war-zone, but "on a larger scale." 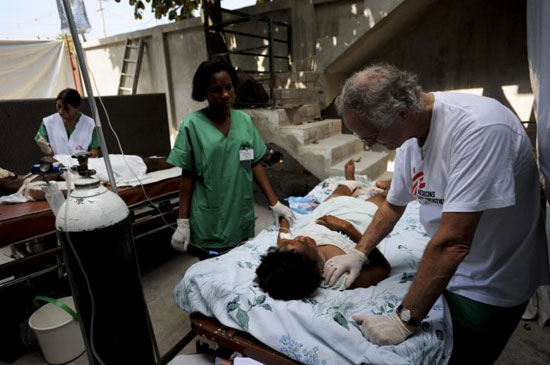 MSF surgeon Paul McMaster tends to a patient at a makeshift operating theater outside Carrefour Hospital, five days after the January 12 earthquake in Haiti.

The conditions confronting Doctors Without Borders/Médecins Sans Frontières (MSF) surgeons Angeleke Saridakis and Paul McMaster in the aftermath of the January 12 earthquake in Haiti were as daunting as any they’d ever encountered. Working day and night in a devastated city, they and their colleagues manned makeshift operating theaters while contending with shortages of equipment, electricity, personnel, food, and water.

They could offer little in the way of post-operative services and couldn’t say when re-supply bottlenecks would clear. And one after another, Haitians were arriving with “brutal injuries,” said McMaster—badly broken bones, multiple fractures, crushed limbs, wounds that hadn’t been treated immediately and were already infected. Saridakis was reminded of injuries she’d seen in war zones on previous missions, except this was “on a larger scale.” Even in the worst conflict areas, there is an ebb and flow to emergency medical needs. In Haiti, however, everyone had been wounded at the same time.

The conditions forced medical teams to make scores of wrenching decisions. Among the most difficult, both surgeons said, was whether or not to amputate a limb. “Amputation is clearly the last resort,” said McMaster, “something done only after all other options are considered.” And, in fact, amputations represent a small fraction of all the surgical procedures MSF has performed in Haiti.

In some cases, though, given the circumstances, there is no other choice. “There’s not a single surgeon that I met that isn’t disturbed every time they have to do an amputation,” said Saridakis. “These are a highly motivated and compassionate group of surgeons who have left their private practices, who have left their comfortable lives and have gone to try to help these men, women and children, and not a single one was dismissive about the impact that an amputation would have on a human being’s life.”

“But when it comes down to life or limb,” she said, “every trauma surgeon—even at level one trauma centers—will tell you, between life and limb, we always try to preserve life.”

Saridakis delineates three groups of patients who might require an amputation, each of which presents doctors with different considerations, each of which affects doctors in different ways, all of which were seen in abundance in Haiti: “The first group are people that truly have crushed limbs that cannot be salvaged under any context. And those patients, certainly you do an amputation with a sense of loss for the patient who is losing a limb, but you know that even under the best circumstances, this is what this patient would need. The second group is more difficult. Those are patients that you recognize that under the best circumstances, if you had the resources that one has back home, there is a likelihood that you would be able to salvage the limb. It’s difficult to do amputations in these patients, but you do it anyway in order to save their lives.”

“And the third group,” she continued, “are people that clearly would need amputations in any context because their infection has advanced, because they were brought to us late.”

In cases where amputation is not immediately required, McMaster said, “we have clear guidelines on the management of these severe wounds. We remove all dead tissue, leaving the wound completely open, and we do not do any suturing at all at that stage.” Days later, the bandages are removed and the wound is re-examined. “If healing is beginning,” he said, “then the wound itself can be closed. If it is not, then further action will be needed.”

The lifesaving and contextual logic underpinning the choice to amputate does not always mute the visceral response, however. “It’s especially difficult when it’s a kid,” Sardarkis said. “And, yes, I did experience that. And it was a very difficult decision. We discussed it as a team, and discussed it with the mother as well, but it is done in order to save lives.”

It’s never an easy decision, McMaster said. “Having to amputate the limbs of children who have already been deeply traumatized by their experiences is always hard to do.”

Many MSF surgeons were informed by lessons learned in past missions, in places beset by conflict, natural disasters, or other medical emergencies and shortcomings. “The normal surgery we undertake in civilian practice really doesn’t prepare you for the shock of these types of injuries and the severity and extent of it all,” McMaster said. “In MSF, because of our wide experience in conflict and other earthquake disasters, we’ve sadly learned that it is necessary early on to take that critical decision and undertake amputation.”

The need for care does not end once the limb is removed, however. Rather, a new and equally crucial phase begins, one that involves after-care specialists, physiotherapists, mental health counselors, reconstructive surgeons and others who can help the patient learn to adapt to their situation—learn, in essence, to live and move again. This is a particular concern at present, as some emergency medical organizations, believing the acute phase to the emergency to be complete, have begun to leave Haiti.

“We’re starting to need, and I mean really need, things like crutches and physiotherapy,” Saridakis said. “Caregivers must provide health care with a special focus on mobilizing people and returning them to a minimally debilitated state.”

MSF has already opened four sites specifically dedicated to post-operative care, and a fifth will open soon. Teams have been working with the independent non-profit organization Handicap International on physiotherapy and rehabilitation programs in several facilities. MSF has also expanded its mental health activities in its various locations and through outreach programs, offering psychological counseling to the injured, the maimed, the homeless, the grieving, and the bereft. Though there are signs that some measure of normalcy has returned to Haiti, there is still, quite clearly, a great deal of work to be done.

“A lot of people are saying that the emergency is over, and I take issue with that,” Saridakis said. “I think it is not over. The emergency is going to be ongoing for months.”

For doctors and amputees alike, many challenges await, she adds, particularly given the ongoing struggle to find decent living conditions for Haitians who lost their homes and now reside in hastily-erected, poorly-served, thoroughly unsanitary camps. “I contend that until every patient has a prosthesis, and enough physical therapy and mental health counseling that their quality of life is maximized and their disability is minimized—that they’re taught how to live with this disability—until that point, the emergency, in my eyes, is not over,” she said.