"The biggest problem is that the baby is at critical risk due to the mother’s dehydration—the baby will not receive enough oxygen, blood flow, or the necessary nutrients, which causes distress." 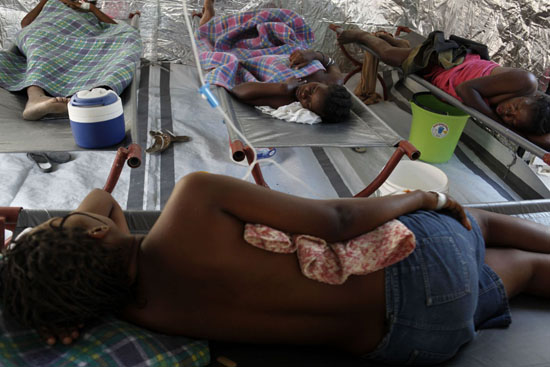 Women recover inside an MSF-run cholera treatment center on the grounds of Isaie Jeanty maternity hospital. These women were in labor or in the late stages of pregnancy and suffering from cholera symptoms when they arrived. Most lost their babies. 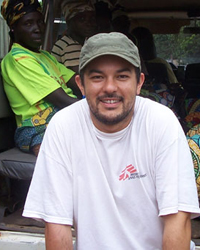 Isaie Jeanty Hospital is a Haitian Ministry of Health maternity hospital in Port-au-Prince which has received support from Doctors Without Borders/Médecins Sans Frontières (MSF) since March 2010. The MSF teams focus on obstetric cases in this referral teaching hospital and provide intensive care for newborns. More than 7,000 healthy babies have been born in the hospital in the past seven months. In November, when cholera cases began appearing in Port-au-Prince, pregnant women started arriving at the hospital sick with cholera and experiencing obstetrical complications or premature labor as a result.

MSF midwife Felipe Rojas Lopez is helping to treat women with cholera symptoms who are in the late stages of delivery and in labor at Isaie Jeanty. Rojas Lopez arrived in Haiti in early November. He and his team set up an isolation ward of around 12 to15 beds on the hospital grounds and over the past three weeks they have been treating a quickly rising number of patients. Here, he describes what is happening on the ground.

How does cholera affect women in the late stages of pregnancy?

Cholera does not discriminate—it affects pregnant women the same way it affects everyone, with dehydration, diarrhea and vomiting. Most pregnant women with cholera do not suffer from complications and are treated like other sick adults. But in some cases, cholera will lead to premature labor or obstetrical complications. Here at the Isaie Jeanty Hospital, we focus on providing much needed care to these cases.

The biggest problem is that the baby is at critical risk due to the mother’s dehydration—the baby will not receive enough oxygen, blood flow, or the necessary nutrients, which causes distress. Women sometimes wait too long between the early stages of symptoms and going for a consultation, and by time they arrive, their condition can be very bad. Sometimes the baby has already died intra-uterus as a result of the lack of hydration. 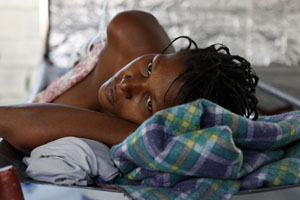 How often are you seeing this?

As we have become a referral place for pregnant women with cholera who have obstetrical complications as a result of the cholera, it’s not unusual that we see such cases. We’ve done 17 deliveries. The mothers have all survived, but most of the babies had died in the womb by the time they were admitted. Of the three babies who were born alive, we had to resuscitate one. The other two were in good shape and we treated them as we would any healthy baby.

So the babies do not contract the disease from their mothers in the uterus?

No, the baby does not get cholera in the uterus, and they are not born with any problems like diarrhea or vomiting. The baby suffers from the effects of its mother’s dehydration.

How do you treat the sick women who are about to deliver or who have just delivered their babies?

We follow the standard cholera treatment protocol. So, it’s three plans of rehydration depending on the level of dehydration—A, B or C. If they can drink, they drink oral rehydration solution—that’s plan A. If they have trouble drinking, we give then an IV and also try to get them to drink—that’s plan B. If they need plan C, which most of the patients we see here do, that means you have to rehydrate them by giving them an IV and having them pass a lot of fluids in a very short period of time.

In fact, there is actually not much scientific literature on treating pregnant women with cholera and I am hoping we will study this project and draw conclusions that will help in the future.

The women who lose their babies must be devastated. How are they coping?

There are some mothers who knew they were in very bad condition and knew their baby could not have made it through. Others are in a state of denial. We have a psychosocial team in the hospital and they help by coming in and talking with each of them. 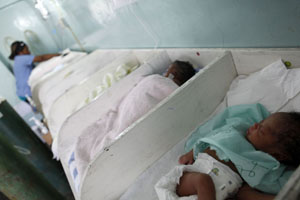 The live babies born to mothers with cholera here are treated with other healthy babies inside the Isaïe Jeanty hospital.

Inside the tent is usually very quiet. We are concerned about their conditions. The women can be very depressed, having lost their babies and continually having diarrhea and vomiting. We try to cheer them up a little. The mothers who are getting better will start talking and laughing sometimes

What is happening in the tent right now?

We have 11 women in the cholera treatment center (CTC). Six are on plan A treatment. One has a dead fetus and this may become a complicated case because I think she has an intra-uterine infection—we are waiting now for the doctor to examine her. The others are in stage B, so it’s a relatively calm day.

How have you managed finding space for these patients?

Well, we are on the grounds of the maternity hospital. When we began to have patients arrive with cholera symptoms, we knew we had to isolate them. So we set up an isolation ward in the yard of the hospital. We went from one patient to 10 in about a week and now we are having usually about 15 at a time—we discharged three yesterday so we have fewer right now.

We are planning on increasing our capacity for obstetrical care for pregnant women with cholera by adding this component within a bigger CTC. Isaie Jeanty is a hospital for emergency deliveries, so we only see women in late stages of pregnancy or in labor. But we want to be able to treat any pregnant woman with cholera. So, within the next two weeks we should have more capacity to treat more women at a new MSF facility in Delmas neighborhood of Port-au-Prince.

In Haiti, MSF has treated more than 41,000 people for cholera and cholera-like symptoms since the outbreak began, including more than 3,500 during the week that ended November 28.