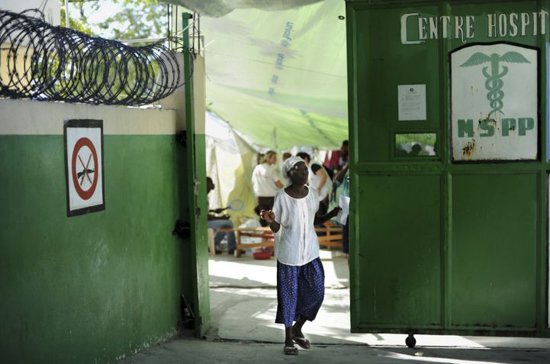 The entrance of Choscal Hospital, in Cite Soleil, which houses one of the ten operating theaters MSF has established in Haiti since the earthquake hit.

On Wednesday morning, as Doctors Without Borders/Médecins Sans Frontières (MSF) teams in Haiti continued to work through long queues of patients waiting for treatment and surgery, the country was shaken anew by a powerful aftershock. In Choscal hospital, where MSF has been running two operating theaters, patients were so alarmed by the tremors that they had to be relocated into tents outside the building. The surgeons stayed in the hospital, however, rotating in regular shifts, performing one operation after another.

In the week since the January 12 earthquake, MSF has established 10 operating theaters in the battered country. Seven are in Port-au-Prince hospitals—Choscal, Trinité, Carrefour and Chancerelle—and three others are outside the capital, in the towns of Leogane and Jacmel. Overall, MSF surgical teams have been carrying out an average of 130 operations per day. Simultaneously, logisticians are racing to find new facilities or rehabilitate damaged ones. Additional operating theaters are being prepared in Leogane and Grand Goave, west of the capitol, and inside Port-au-Prince, where a team expects to complete the construction of an inflatable hospital with two operating theaters by Friday.

When possible, MSF has been expanding its services. The team working in Carrefour, for instance, initiated psychological support programs for patients who’ve had limbs amputated. Physiotherapy for burn victims is now available at another MSF facility, while dialysis treatment for people with crush injuries has begun at Port-au-Prince’s General Hospital.

According to Dr. Greg Elder, deputy operations manager for MSF in Haiti, some sites are facing a 10 to 12 day backlog of patients due to the huge number of people who need treatment and ongoing delays in getting crucial supplies into the country. Some victims are already dying of sepsis, an illness caused by infections that can affect people with untreated wounds. While the emphasis now remains on providing immediate care, Elder says that the next health risk could include outbreaks of diarrhea, respiratory tract infections, or other diseases among the hundreds of thousands of Haitians living in overcrowded camps with poor or nonexistent sanitation. Another issue is the provision of care for chronic illnesses that cannot be attended to in the emergency phases of a response such as the one now underway in Haiti.