Haiti Unprepared in the Face of Resurgent Cholera

Cholera cases are on the rise in Haiti following the onset of the rainy season, and the country is not adequately prepared to combat the deadly disease. 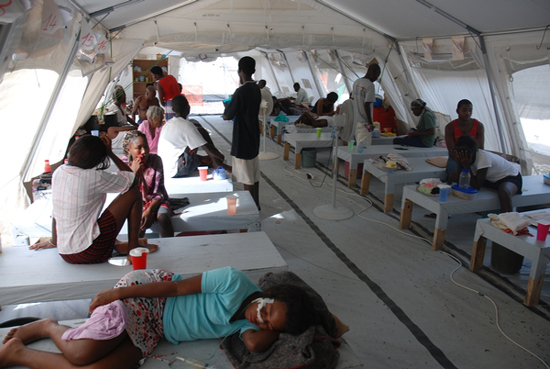 PORT-AU-PRINCE, MAY 9, 2012—Cholera cases are on the rise in Haiti following the onset of the rainy season, and the country is not adequately prepared to combat the deadly disease, the international medical humanitarian organization Doctors Without Borders/Médecins Sans Frontières (MSF) said today.

While Haiti’s Ministry of Health and Populations claims to be in control of the situation, health facilities in many regions of the country remain incapable of responding to the seasonal fluctuations of the cholera epidemic. The surveillance system, which is supposed to monitor the situation and raise the alarm, is still dysfunctional, MSF said. The number of people treated by MSF alone in the capital, Port-au-Prince, has quadrupled in less than a month, reaching 1,600 cases in April. The organization has increased treatment capacity in the city and in the town of Léogâne, and is preparing to open additional treatment sites in the country. Nearly 200,000 cholera cases were reported during the rainy season last year, between May and October.

“Too little has been done in terms of prevention to think that cholera would not surge again in 2012,” said Gaëtan Drossart, MSF head of mission in Haiti. “It is concerning that the health authorities are not better prepared and that they cling to reassuring messages that bear no resemblance to reality. There are many meetings going on between the government, the United Nations and their humanitarian partners, but there are few concrete solutions,” he said.

An MSF study in the Artibonite region, where approximately 20 percent of cholera cases have been reported, has revealed a clear reduction of cholera prevention measures since 2011. More than half of the organizations working in the region last year are now gone. Additionally, health centers are short of drugs and some staff have not been paid since January.

“Rain is just one of the risk factors for contamination. But as soon as the rains end, cholera subsides, and funding stops until the next rainy season, instead of money being channeled towards cholera prevention activities. As a consequence, people are still highly vulnerable when cholera comes back,” said Maya Allan, MSF epidemiologist.

The majority of Haitians do not have access to latrines, and obtaining clean water is a daily challenge. Of the half-million survivors of the January, 2010 earthquake who continue to live in camps, less than one third are provided with clean drinking water and only one percent recently received soap, according to a April 2012 investigation by Haiti’s National Directorate of Water Supply and Sanitation.

“Hygiene advice is of little use if people are unable to put it into practice,” said Drossart. ”People urgently need the means to protect themselves against cholera.”

While the cholera vaccination being used in some parts of Haiti can help control the disease, it is not a foolproof solution. The vaccine provides immunity for approximately three years and is estimated to be only 70 percent effective. Only major improvements of Haiti’s water and sanitation systems will provide durable solutions to the epidemic, but that will take time.

“The priority today is to save lives,” said Drossart. “All health actors in Haiti need to start working towards this goal immediately.”

Since cholera emerged in Haiti in October 2010, 535,000 people have been infected and more than 7,000 people have died, according to the Ministry of Health and Populations. To date, MSF has treated more than 170,000 people, or 33 percent of total cases, across the country.