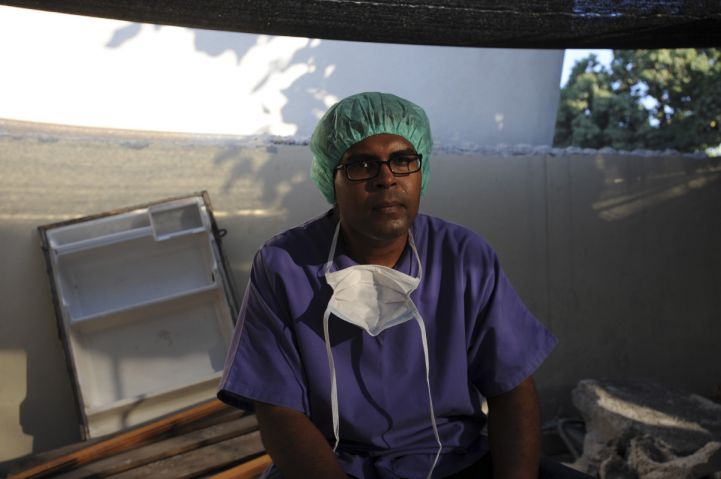 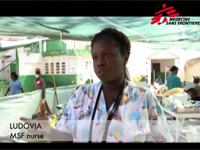 PORT-AU-PRINCE – Haitian surgeon Dr. Philippe Brouard has worked with Doctors Without Borders/Médecins Sans Frontières (MSF) at Trinité hospital in Port-au-Prince since 2006. On January 13, the morning after the earthquake, he came to work at the trauma surgery centre only to find that most of Trinité had collapsed. Two of his colleagues and several patients had been killed. MSF had immediately evacuated surviving patients from the hospital and was treating them outside, while wounded people from the surrounding areas flooded toward what was left of the hospital. Dr. Brouard performed triage on that first day, identifying patients who needed urgent medical attention. By the second day, he was doing amputations in an improvised operating theater because the ones inside the decimated structure could no longer be used.

“The patients kept demanding your attention, touching you,” recalls Brouard. “‘Please doctor here, don’t forget me!’ they would say. You do all you can, but there are always so many people calling you. Of course we are forced to prioritize, but while we were seeing one patient we would try comfort the others, say a kind word: ‘Don’t worry. We won’t forget you.’”

Dr. Brouard feels lucky that his family is safe and his house is still standing, but he has not come out of the quake unaffected. “You focus on the patients all day – you cure people – but when you go home, you see the state of your country and that does something to you,” he says. “You see the supermarket that collapsed, the bank that is at risk of falling down. You can’t help thinking what life is going to be like in a week, in a month, in a year?”

Unlike Dr. Brouard, many other Haitian staff-members lost their homes and family members. Charles Joseph, a social worker at MSF’s Martissant hospital, lost a cousin and his entire house in the earthquake. “Now we are in the streets with the children, my wife, everyone,” he says. “I have come to work because this is a disaster and it is my business. It is everyone’s business. If people from other countries can risk their lives and come here to cure people–me, as a Haitian, I must do the same.”

The commitment and hard work of MSF’s Haitian staff has been crucial to MSF’s effort to save lives in the aftermath of earthquake. Prior to the disaster, the medical humanitarian organization had more than 800 Haitians staffing three hospitals in the capital. MSF has confirmed that four employees died in the quake and six others remain unaccounted for.

This past weekend, MSF’s international president, Dr. Christophe Fournier, came to Port-au-Prince to offer the organization’s deepest condolences to Haitian colleagues who have continued working despite tragedies on both personal and national levels. “I would like to say to you that everyone in MSF, all over the world, shares your pain, your grief,” he told a meeting with Haitian staff at Martissant hospital. “We are all thinking of you. So many of you have lost your houses, friends, family members. And yet you are all here working hard to save lives, to treat people. In the name of all the MSF movement, I want to thank you and to say that we are all together and we will support you while you recover from this disaster.”

In the streets of Port-au-Prince, people are struggling to rebuild their lives in the midst of rubble. “We are used to hurricanes but an earthquake was the last thing we expected,” explains Brouard. “It will take time to recover. This country has had a huge material loss and we have also lost some human capital. We have lost some great minds, some brilliant people. They have to be replaced. It will take time. What is going to happen to this country?”

Alessandra Vilas Boas is an MSF Communications Officer based in Rome. She has been in Haiti since last week.