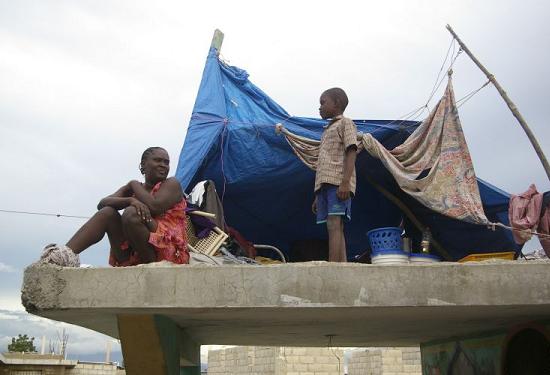 GONAÏVES, October 13, 2008 – Five weeks after a series of hurricanes struck Haiti, people in the city of Gonaïves are still deprived of essential services, the international medical humanitarian organization Doctors Without Borders/ Médecins Sans Frontières (MSF) said today. Since early October, families have been evicted from schools and churches where they had sought refuge after the storms destroyed their homes.

With no alternative housing available, MSF estimates that approximately 10,000 people—out of a total population of 200,000—are living on roofs, in tents, or in fragile shacks made of wood debris and bed sheets. Other families are crammed into abandoned buildings by the dozens, or staying temporarily with relatives in overcrowded conditions that increase the risk of poor sanitation and domestic violence. In addition to this, electricity and running water have yet to be re-established.

While it has not rained in more than ten days, many roads are still flooded. Mud is more than three feet deep in some parts of the city, making it extremely difficult to get around. “It’s as if a cyclone passed through here just a couple of days ago,” said Vikki Stienen, MSF project coordinator in Gonaïves. “The coordination of relief efforts is extremely chaotic.”

“Usually after natural disasters MSF can reduce it activities after the first month,” Stienen said. “Here, it’s the opposite; we’ve had to reinforce our teams and our intervention.”

So far in Gonaïves, MSF has distributed 3,000 family kits (including plastic sheeting, soap, and jerry cans) and is distributing 2,000 more beginning today. Moreover, MSF is planning to distribute another 5,000 kits to cover the needs of as many people as possible in the city. Additionally, MSF is providing the majority of clean drinking water distributed in Gonaïves, a total of one million liters per day.

MSF is also witnessing an increase in the number of malnourished children admitted to its hospital. MSF re-opened the hospital in Gonaïves only 10 days ago and seven severely malnourished children have already been admitted. This number is expected to grow as people hear about the re-opening of the hospital. Haitians already face chronic food crises and nutritional deficits. The recent hurricanes destroyed crops and killed significant numbers of livestock, making people all the more vulnerable. 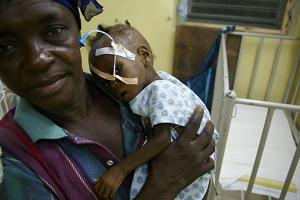 International food aid reaching the community is clearly insufficient in quantity, unsuitable for the nutritional needs of young children, and is being distributed in a way that excludes single mothers. There is still no clear strategy to identify the needs, nor implement a proper nutrition response.

Despite the significant presence of international organizations, the people of Gonaïves have yet to see much benefit. Hurricane season ends in late November. If another storm were to strike the region with more heavy rains, inhabitants here would once again pay a heavy price.

MSF urges international organizations and the Haitian government to immediately re-examine their emergency aid response, and to prioritize housing and nutritional support for the youngest of the flood victims.