MSF is responding to an alarming increase in cases of dengue fever in Honduras. 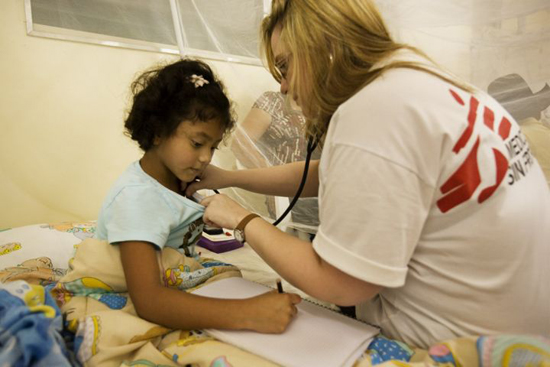 An MSF staff member attends to a child in San Felipe Hospital in Tegucigalpa.

Due to an alarming increase in cases of dengue fever in Honduras this year, Doctors Without Borders/Médecins Sans Frontières (MSF) has launched an emergency intervention in Tegucigalpa, the capital, where the majority of cases have been reported. MSF is supporting local health services with a three-pronged approach that focuses on medical care, vector control, and community education.

This sort of intervention to a dengue outbreak is relatively new for MSF, but the organization has already set up an emergency pediatric unit and treated more than 80 children. Mobile teams are also working with the local health authorities to identify and eliminate sources of infection in 4,400 households in the Tegucigalpa area.

Dengue, which is endemic in Central America, is a viral disease transmitted by mosquitoes of the genus Aedes. Symptoms are similar to flu; they include headaches, fever, nausea, abdominal pain, and skin rashes. The most severe form, dengue hemorrhagic fever, causes bleeding and shock and can be fatal.

In Honduras, more than 50,000 cases of dengue have been reported to date in 2010, a significant increase from the previous year. However, the most alarming feature of this outbreak is the prevalence of hemorrhagic dengue. More than 1,500 cases have been reported—a massive 1,850 percent increase from 2009—and 160 people have died. “I had come across the previous kind of dengue,” said Herminia Moncada, whose son was recently admitted to hospital with the disease. “But this is different. This dengue kills.”

The Ministry of Health has been responding to the high number of cases of dengue by making more hospital beds available and setting up specialized units in health centers in outlying areas. Despite this, the main referral hospital has still been overwhelmed by the upsurge in patients. Until recently, children with dengue fever were transferred to the referral hospital, as the decentralized units were only receiving adult patients. To ease the overcrowding, MSF set up an emergency ward at the San Felipe Hospital, on the outskirts of Tegucigalpa, to care for children younger than 15 who showed symptoms of the disease. The 23-bed ward was filled to capacity on its second day of activity.

In the hospital, treatment for children includes hydration and rest. “With dengue, we are unable to identify beforehand the patients who will improve rapidly,” said Dr Elisabeth Bragança, who is in charge of the MSF emergency ward. “There is no vaccine or specific medicine for the virus, so all we can do is control the symptoms and treat the consequences while waiting for the body to stabilize.”

Even if the treatment sounds simple, hydration needs to be administered carefully to avoid a fluid overdose. Severe dengue alters the permeability of blood vessels and there is a risk of fluids invading other parts of the body, causing complications such as pulmonary edemas. “An ongoing balance in the amount of fluids given needs to be maintained,” said Dr Bragança.

MSF health staff are also spending time teaching the children’s parents and caretakers how to administer the fluid to their children. “In my opinion, the success of this medical intervention mostly relies on us collaborating with the parents,” said Dr Bragança. Frequently, parents stay in the ward throughout the night, giving their children fluids by mouth at set intervals and writing down the amounts so that they can tell the health staff later. Many go long stretches without sleep. MSF has therefore made sure to include emotional support for the parents as part of the intervention.

Seeing children recover can be a very rewarding experience. Just one day after being admitted to the ward, five-year-old Lucía Isammar Elvir was able to give her mother a big smile and declare that she wanted to go home, saying, “I want to paint and draw.” 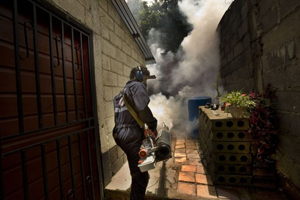 MSF's response to dengue includes steps designed to prevent outbreaks from spreading or from occurring in the first place. “Education is an essential component of fighting dengue,” said Luis Montiel, logistics coordinator for the project. “It is a crucial aspect that will define the course of future epidemics.”

In addition to providing medical care, MSF is fighting the dengue outbreak with “vector control,” which means going after the mosquitoes that spread the disease. Along with the Ministry of Health’s vector control body, MSF mobile teams are at work in the Manchen settlement, on the outskirts of Tegucigalpa, where the highest rates of affected people have been reported.

Mosquitoes carrying the dengue virus breed in stagnant water, so proper water management within households is vital. In the Manchen settlement, where houses sit on hillsides, families receive water only every fortnight and store it in tanks. Jerry cans and water containers sitting stagnant in the narrow corridors of houses provide a perfect environment for mosquitoes to breed. So do rubbish and rubble piles.

Among these mostly poor families, waste management is no easy task. María Mercedes Suazo Bustillo, 89, explained how, ever since one of the rooms in her house had collapsed, she had been unable to get rid of the rubble and useless furniture: “I am poor, and to throw this away costs money.”

An MSF team is going house-to-house in Manchen looking for potential sources of infection and explaining how to stop mosquitoes from breeding and spreading the virus. The challenge is to change people’s habits and social customs and to get them involved in the fight against dengue.

The mobile teams also treat stored water, which prevents mosquito larvae from hatching. Later, after gaining the trust of the families, they will return to spray houses in order to break the mosquitoes’ reproductive cycle. To date, MSF has treated the stored water in 700 households and sprayed 400 houses, while plans are in place to spray 4,000 more.