Conflict in Mali has driven nearly 70,000 refugees to Mbera camp in the Mauritanian desert, where appalling conditions and inadequate assistance are leading to severe malnutrition and deaths from preventable diseases. 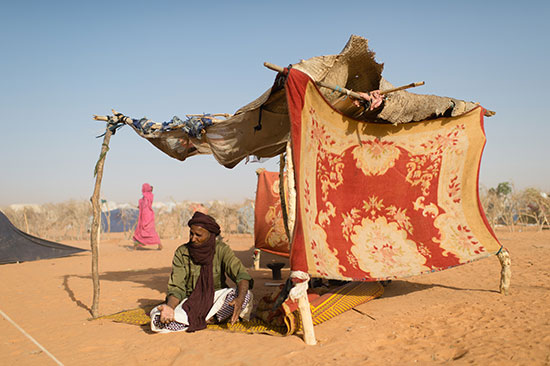 Houmou Ag Amamili arrived in the Mbera camp on November 14, 2013. As of March 11 he still had not received a tent in which to live.

Conditions in the camp worsened following an influx of 15,000 refugees in the aftermath of the joint military intervention by French and Malian forces in Mali in January. The number of consultations in MSF's clinics in the Mbera camp increased from 1,500 to 2,500 per week. The number of children admitted per week for severe malnutrition more than doubled, from 42 to 106, despite the fact very few children were malnourished when they arrived at the camp.

"These statistics show that the refugees have grown weaker while in the camp, the very place where they should have been receiving assistance, including correctly formulated food rations from aid organizations," said Henry Gray, MSF emergency coordinator.

The report, Stranded in the Desert, calls for urgent action by aid organizations to meet the refugees' basic needs. In January there was only one latrine for every 3,000 refugees, and people were receiving just 11 liters of water per day, instead of a required 20 liters. Many people have been living under makeshift shelters made of scraps of cloth and sticks. While more latrines are being built, conditions remain extremely difficult.

"There has clearly been a lack of preparation for this new influx of refugees,” said Gray. “While the situation has improved in recent weeks, it remains extremely precarious and aid organizations need to maintain their humanitarian response for as long as necessary. Shelter, clean water, latrines, and food must reach all of those in need, and be sustained at the minimum humanitarian standards."

Drawing on testimonies from over 100 refugees in Mbera, the report also reveals how open conflict, inter-communal tensions, fear of violent reprisals, food insecurity, and lack of basic services have forced people to flee, mostly from the Timbuktu area of Mali. They arrived in Mauritania only to become isolated in the middle of the desert and totally dependent on outside assistance and humanitarian aid.

"In northern Mali, entire communities are currently displaced within their country or have escaped abroad as refugees," Gray said. "Most of the refugees are from the Tuareg and Arab communities. They fled pre-emptively, often from fear of violence due to their presumed links with Islamist or separatist groups. Their home in northern Mali is still in the grip of fear and mistrust."

MSF has been working in Mauritania since the arrival of the first refugees in early 2012, and has frequently warned that the appalling conditions in Mbera are having alarming health consequences for refugees. In November 2012, MSF conducted a retrospective nutritional mortality survey that revealed death rates above emergency levels among children under two years of age.

MSF runs medical and humanitarian programs in the Malian regions of Mopti, Gao, Sikasso, and Timbuktu, as well as for Malian refugees in Burkina Faso, Mauritania, and Niger. In Mauritania, MSF supports four primary health care centers in the Mbera camp and at the Fassala border crossing post, and runs a surgical program in the town of Bassikounou. Since starting to work in Mauritania in February 2012, MSF teams have conducted 85,000 medical consultations, assisted in 200 deliveries and treated nearly 1,000 children suffering from severe malnutrition.