MSF has sent two teams to assess the needs of the affected population in the districts of Kurnool and Vijaywada in Andhra Pradesh. 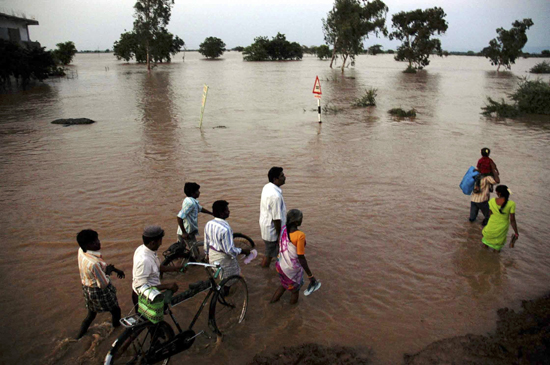 People wade through floodwaters in the southern Indian state of Andhra Pradesh.

Millions of people have been left homeless in the Indian states of Karnataka and Andhra Pradesh following floods due to heavy rains over the last week. More than 250 people are confirmed dead, according to Indian officials.

Doctors Without Borders/Médecins Sans Frontières (MSF) has sent two teams to assess the needs of the affected population in the districts of Kurnool and Vijaywada in Andhra Pradesh. The team in Kurnool will distribute 1,000 non-food-item kits, each containing kitchen utensils, hygiene materials, and plastic sheeting to use for shelter. The team also hopes to provide further assistance, depending on what needs are identified.

“Many displaced people are in fear and shock, and the situation on the ground is rather chaotic," said Simon Burroughs, MSF’s emergency coordinator in Andhra Pradesh.  "Access to the affected people is difficult, as the main infrastructure has been damaged. Bridges and railway tracks were swept away. Some people are stranded on isolated island pockets and can’t be reached by road. The team is now focused on getting a full picture of people’s needs, and hopes to begin its assistance as soon as possible.”