Indonesia: "Emergency phase is mostly over; now we enter recovery"

However, MSF teams are still finding remote areas where aid has yet to arrive. Inhabitants have lost their houses and belongings, and are clearly are in need of essential relief items. 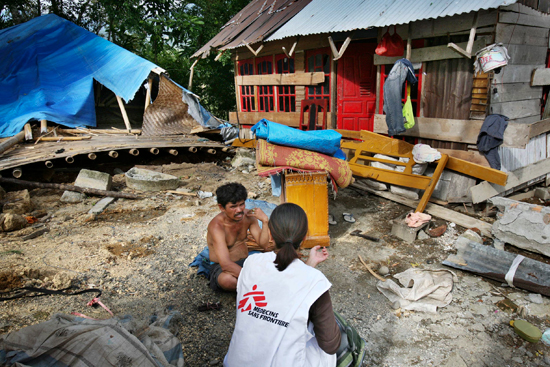 An MSF psychologist speaks with an earthquake survivor near Padang Alai on the island of Sumatra.

Doctors Without Borders/Médecins Sans Frontières (MSF) responded immediately to an earthquake that struck the Indonesian island of Sumatra on September 30. Loreto Barceló, coordinator of the MSF emergency teams there, talks about how the situation is evolving on the ground nearly three weeks later.

What is the situation like on the ground today?
Many aid organizations have already withdrawn. The Indonesian authorities are now trying to identify gaps in order to relocate aid efforts. In the meantime, our teams are still finding remote areas where no aid has arrived yet. These are small villages. The inhabitants in these areas have lost their houses and many of their belongings. They clearly are in need of essential relief items.

The problem is that access to these villages is very difficult. It has been raining heavily in the past few days and the roads are muddy and in very bad condition. There was a new landslide last Saturday.

How are people on the ground enduring and what are their needs?
The emergency phase is mostly over. We are now entering the recovery stage. Many families that had been displaced are returning to their homes and others who have lost everything are looking for a place to stay. The government has started building temporary shelters where survivors from the most affected areas will be relocated. Our teams are going to intervene to ensure proper water and sanitation conditions in these shelters.

On Saturday I saw a case that illustrates how difficult recovery is going to be for many people. When we were conducting a mobile clinic, we saw one of the survivors of a landslide returning home and we went to visit him. He told us that when the earthquake occurred he was praying. He was caught under the landslide and remained trapped in the mud for over 24 hours with many other people. He was rescued with some of them, but many were not so lucky. He was sent to hospital where his fractured legs were operated on. Now he is back, in a wheelchair, recovering. Yet the wheelchair is not easy to manage in these places.

Generally speaking, do you believe aid is reaching the survivors?
The response has been adequate and even more than needed in some areas, yet coordination was lacking at first. Most of the aid has focused on certain areas while the needs in other remote locations are still unmet. In addition, now that the emergency phase is over, some coordination bodies are being dismantled.

How has MSF responded?
The first teams arrived in the affected areas three days after the earthquake. An intervention in the main hospitals was unnecessary as they were already receiving an important amount of aid and could address the needs, so we decided to organize mobile clinics in some of the most neglected rural areas. These were either in remote locations where access was difficult or in other sites that were less affected, but had been neglected by relief efforts.
The main health issues observed in the clinics are respiratory tract infections, diarrhea, and skin diseases—all issues related to the difficult living conditions currently endured by the survivors.

MSF is also offering psychological care to traumatized survivors. The emergency team has included several psychologists who have been training Indonesian psychologists—some of these Indonesian professionals had worked with MSF in the aftermath of the 2005 tsunami that also affected Sumatra, as well as another earthquake in 2007. Now we have several teams carrying out psycho-educational sessions where they explain simple ways to cope with these traumatic events. For the most severe cases, the psychologists are also offering individual psychological support sessions.

Another MSF team is working on water and sanitation, installing water tanks in several villages and ensuring the supply, as well as intervening in temporary shelters being built by the government.

Finally, we have already distributed essential non-food items, including hygiene kits, kitchen utensils, blankets, mats, and plastic sheeting to about 1,600 families. These distributions will continue while we also distribute basic tools for the population to help them rebuild their houses.

How long is the MSF intervention expected to last?
We estimate our intervention should last until mid-November. In the month we have left we will have time to complete the water and sanitation activities, ensuring good conditions for the population?for those returning to their homes and those who are to move to the shelters.

Medically speaking, we see that health centers are little by little becoming operational again; their staff is returning to work and even though some have to work under tents, as the actual structures are now destroyed, normalcy is being restored. In the field of mental health, we will have enough time to provide survivors with the initial support they need to cope with their recovery. Globally, the aim of MSF is always to intervene in the emergency phase addressing the most pressing needs. Then both the government and other organizations will take over and be responsible for reconstruction.