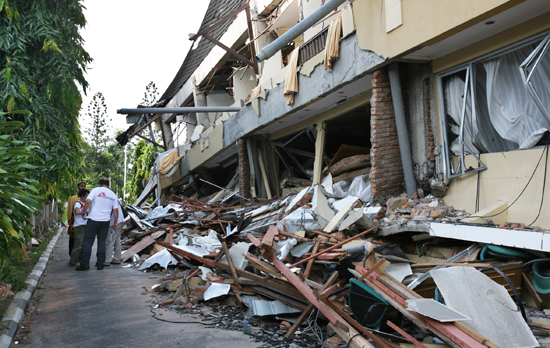 MSF staff conduct an assessment of post-earthquake needs in Padang.

Three days after a powerful earthquake hit the Indonesian island of Sumatra—leaving close to 1,000 dead, approximately 3,000 missing, and more than 3,000 wounded—the first Doctors Without Borders/Médecins Sans Frontières (MSF) teams arrived in the area.

About 20 workers—including surgeons, kidney specialists, nurses, psychologists, and logisticians—began assessing the needs in the city of Padang and surrounding area on October 3.

Massive aid sent by the Indonesian authorities and from abroad has already reached Padang, the major city of the region and one of the most affected by the earthquake. MSF assessed the situation in the city’s hospitals, where important assistance has been provided, and have begun evaluating the needs in the region.

An area of great concern is the city of Pariaman, one of the most affected towns, located approximately 50 kilometers (30 miles) north of Padang, and especially the surrounding rural areas, where several villages have been completely destroyed by landslides and access to relief efforts remains difficult.

While relief materials are on the way to Sumatra, MSF teams are focusing efforts on trying to access the areas where aid is still lacking and identifying the most urgent needs.