Indonesia: One Month After Earthquake, Focus is on Mental Health 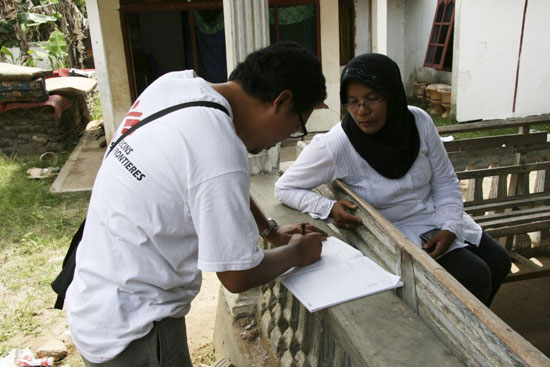 Nearly one month after the earthquake, MSF is focusing on providing mental health training and conducting epidemiological surveillance of communicable diseases, including measles and tetanus, in villages near Padang and Pariaman.

Indonesia: One Month After the Earthquake

On September 30, a massive earthquake hit the Indonesian island of Sumatra, causing widespread destruction and triggering landslides that wiped out entire villages. According to the United Nations, an estimated 2.5 million people have been affected by the 7.6 magnitude quake, which killed 1,117 people in addition to injuring 1,214. One month later, Doctors Without Borders/Médecins Sans Frontières (MSF) is still operating mobile clinics, giving mental health support to the survivors, monitoring epidemics, distributing relief items, as well as providing water and sanitation support.

MSF is focusing on the most affected areas—the villages near Padang and Pariaman, both located on the west coast of Sumatra. A major part of MSF’s reconstruction effort is to provide mental health support to people traumatized by the earthquake. Currently group and individual consultations are carried out for both adults and children. MSF is running therapeutic community activities aimed specifically at children, such as playing sports, and is also providing training to mental health officers from the Indonesian Ministry of Health.

"I worried a lot and had difficulty sleeping during the first two weeks after the earthquake, but I am getting better after a psychological consultation with MSF," says Novaldi, 29, from Lubuk Laweh near Pariaman. He lost six family members in the earthquake.

Besides the mental health activities, MSF continues to provide medical consultations from mobile clinics in the area around Pariaman where people have received little assistance. A few villages are still cut off by landslides and MSF can only reach them by walking or by using motor bikes. More than 1,000 consultations have been carried out by MSF in the area since the earthquake struck.

"In an emergency, we need to be flexible and re-adapt our strategy to focus on the needs of population"

On the positive side, MSF has been able to close the mobile clinic in Painan, further near Padang, because the medical needs related to the earthquake have been covered. "In an emergency, we need to be flexible and re-adapt our strategy to focus on the needs of population," says Elisabetta Maria Faga, MSF Emergency Coordinator in Padang. At the moment, MSF has sent several teams to villages near Padang and Pariaman to follow the vaccination programs that are being conducted by the local health authority and supported by the World Health Organization. The MSF teams will be assessing whether there is any need to have MSF’s support. MSF is also focusing on epidemiological surveillance and closely monitoring the number of communicable diseases, including measles and tetanus.

"Although the response of the government is high, the needs of the population are still huge," says Loreto Barcelo, MSF Emergency Coordinator in Pariaman. MSF teams plan to have distributed relief items—tarpaulins, blankets, mats, hygiene kits, kitchen kits and tool kits—to 16,000 families in villages close to Padang and to 10,000 families in villages near Pariaman by mid-November.

MSF has provided water and sanitation support to the villages near Pariaman, and set up a camp with waterproof shelter for 90 families in the village of Kampung Panas, where there was a landslide.

MSF has more than 70 international and national staff working in Padang and Pariaman. The teams include doctors, nurses, psychologists, water and sanitation specialists and logisticians.