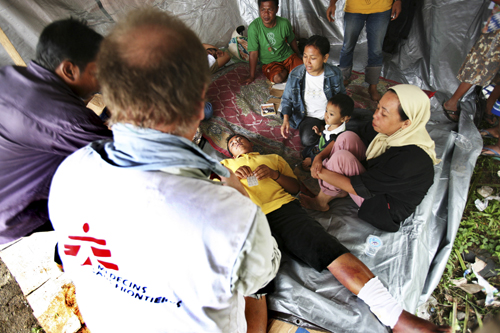 The rural areas around Padang, the major city of Sumatra that was severely hit by the recent earthquake, are still in critical need of emergency relief.

A week after a severe earthquake hit the Indonesian island of Sumatra, rescue operations are coming to an end and the search for survivors has been stepped down. However, relief operations will continue with a focus on assisting the thousands of people that have lost their homes and relatives and are now living in very harsh conditions.

Doctors Without Borders/Médecins Sans Frontières (MSF) has sent emergency teams and relief items to the disaster area. Almost 50 staff—including doctors, kidney specialists, surgeons, nurses, psychologists and logisticians, both international and Indonesian—are now on the ground. In addition, a cargo plane carrying around 45 tons of material, including medical kits, drugs, logistical and relief items arrived in Padang on October 7.

Mobile clinics will provide critically needed primary health care to the displaced, many of whom are now living out in the open.

After assessing the region affected in order to identify the most urgent needs, MSF teams are starting mobile clinics in some of the hardest hit locations. This includes the rural areas surrounding the city of Pariaman, where the level of destruction is particularly high, and the area south of Padang, which has received little emergency aid so far. Mobile clinics will provide critically needed primary health care to the displaced, many of whom are now living out in the open. Additionally, MSF mental health officers will offer psychosocial support to people, who were traumatized by the earthquake.

In the surrounding area of Pariaman, several villages were almost totally destroyed by landslides, and access is still very difficult. In other locations, the majority of houses have been partly or totally destroyed by the quake. In support to those whom have lost almost everything, MSF is commencing the distribution of essential goods, such as plastic sheeting, while also assessing the need for hygiene and cooking kits. The infrastructure in some villages was also hit hard and MSF water and sanitations specialists are in the process of reviewing this situation.