In Abidjan, movement continues to be severely restricted or impossible due to insecurity, which makes it extremely difficult for patients to reach hospitals and for medical staff to access patients. 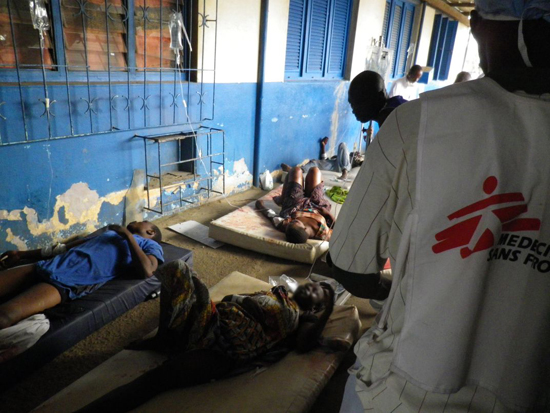 Doctors Without Borders/Médecins Sans Frontières (MSF) continues to provide people with medical assistance and support hospitals in several locations in Ivory Coast, following the post-election violence. Teams are also assisting refugees on the other side of the border in neighboring Liberia.

In Abidjan, Ivory Coast, people are trapped by the ongoing violence and the humanitarian situation is very worrying. Movement in Abidjan continue to be severely restricted or impossible due to insecurity, which makes it extremely diffcult for patients to reach hospitals and for medical staff to access patients. There is a great concern that many wounded people and patients suffering from medical emergencies and other illnesses cannot access proper care.

An MSF team is working in collaboration with health authorities around the clock in Abobo Sud Hospital, the only hospital still functioning in the northern part of the city. On average, 25 to 30 wounded people are treated there every day. Ambulances are currently not functioning in Abidjan, so these patients have come on their own or were brought by cars or even wheelbarrows.

Through the Ivorian Red Cross, MSF was able to provide enough medical supplies to treat 50 wounded people to the general hospital in Treichville, in the southern part of Abidjan, on April 3. Three days later, MSF donated more medical supplies to the hospital. But many other hospitals in the city have not been supplied for days, and when security allows it, MSF is prepared to organize rapid donations and to provide medical care where the needs are most acute.

Today, April 7, the Abobo Sud Hospital was able to receive anesthetics and IV drips. But a top priority for MSF is to bring in a fresh team to the hospital and fully resupply it with medical materials from MSF pharmacies in southern Abidjan and in Bouaké.

Meeting Medical Needs in the West

Dangerous conditions in Abidjan have pushed an estimated one million people who were already fleeing towards the north of the city or to their home villages further away. MSF teams have been providing primary and secondary healthcare in many locations in the western region of the country, where people are greatly affected by the violence. Between March 28 and March 31, fighting between internationally recognized president Alassane Outtara's forces and those loyal to incumbent president Laurent Gbagbo occured in areas including Guiglo, Doala, Duékoué, and Bloléquin. Many wounded people were treated by an MSF surgical team in Bangolo and by another medical team in Duékoué.

Since the fighting between armed groups stopped, MSF has continued to treat newly wounded patients, which suggests the situation remains confused and intercommunal violence continues to be a major high concerns. Between March 28 and April 5, MSF cared for 285 wounded people in Duékoué and treated 150 wounded patients in need of surgery. MSF has also supported hospitals in Danané and Man with medical supplies.

MSF is organizing primary health consultations inside a Catholic mission in Duékoué, a town where some neighborhoods have been looted, and more than 20,000 displaced people have gathered in the Catholic mission facilities. Some of them have been sheltering there since January and need food and water. MSF teams are also providing primary healthcare in Cocoma Health Center in Duékoué, and have rehabilitated the operating room of the Duékoué Hospital after it was looted in December.

In Guiglo, where 15,000 to 20,000 internally displaced persons are living with host families, MSF is providing primary healthcare in a health center in Nicla district, and in a camp where 2,000 displaced people have gathered.

MSF carries out mobile clinics twice a week in Bangolo, Bin-Houyé, Gleupleu, and Zouan-Hounien. At each location, between 50 and 100 patients receive primary healthcare.

On the Liberian side of the border, tens of thousands of Ivorians have sought refuge in Nimba County. The majority of these people are scattered in villages throughout the county, staying with host families. This massive influx of people is putting pressure on local communities and on their ability to cope with already fragile access to basic needs, such as water and food.

The United Nations has set up a refugee camp in Nimba County for 15,000 people. So far, about 2,000 people have been staying in the camp. Some refugees have started to go back to their home villages in recent weeks, and a new wave of refugees has arrived in Grand Gedeh County, just south of Nimba. MSF teams are running mobile clinics for both local communities and refugees in many locations in Grand Gedeh and Nimba, with an average of 80 patients per day, per location. Malaria, diarrhea, and respiratory and skin infections are the main health issues MSF staff are treating.

Currently, MSF has 45 international staff working together with 150 Ivorian staff in Ivory Coast. In Liberia, there are 10 international staff working with 30 Liberian staff. MSF, an impartial medical humanitarian organization, observes strict neutrality in its operations. Its activities in Ivory Coast are funded exclusively by private donors, ensuring the organization’s complete independence.