An MSF team working in Abidjan's Anyama Hospital since April 18 is seeing more than 120 patients and assisting with 10 births every day. 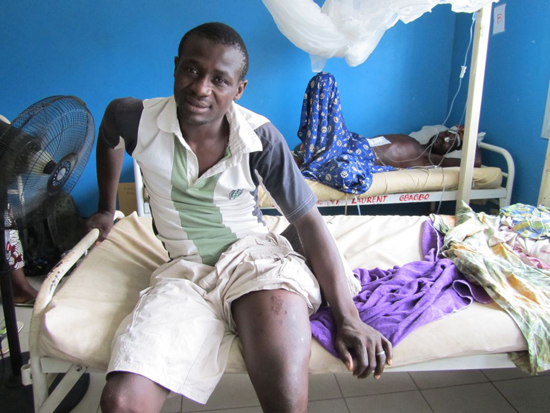 "During the crisis, there were only three of us midwives here in the Anyama hospital," Viviane says gravely, referring to the fighting that raged in Abidjan from late February into April. "There were no doctors and no nurses. Only two nurse trainees came during the day."

Viviane and her two colleagues took 48-hour shifts so that they could assist the women who managed to reach this hospital on the northern edge of Abidjan. Nearly all the health centers in this region of small villages had closed. Despite the midwives' tenacity and courage, many young mothers had to give birth at home because of the fighting and curfew that followed.

Viviane's work days are now returning to normal. A Doctors Without Borders/Médecins Sans Frontières (MSF) team has been working at the Anyama hospital since April 18. The operating room is functioning again. MSF's surgical team is treating emergencies, operating on fractures, and performing caesarians. In addition, post-surgical patients are being transferred to the Anyama facility to ease the pressure at the overworked Abobo Sud hospital, where MSF has been working since late February. The transfers involve orthopedic patients who require long-term care. Their dressings are changed in the operating room, under anesthesia. Soumaïla, 37, is one of these patients. He was shot in both legs and is recovering slowly from his operation. His left foot was amputated because he arrived at the hospital only after his wound had become badly infected.

The MSF team sees more than 120 patients every day, on average, not including prenatal visits with pregnant women. A total of 47 patients are hospitalized. The midwives assist with 10 births per day, on average. Scores of people wait at the hospital doors every morning, starting at dawn. "The patients arrive very early," explains Dr. Hamidou Outtara. "In the beginning, they would get here around 5AM. Now they come at 6AM. We see the first patients at 7:30, but we can't take everyone. We give priority to emergencies, then to children, pregnant women, the elderly and people with chronic illnesses."

Patient visits began on April 18, and from the outset it was clear that services were in great demand. "MSF didn't make any announcements but everyone was here waiting for us," Dr. Outtara says. The people living in Anyama knew that MSF was here and had heard on the radio that the government had decided to offer free medical care. Care had always been free in the locations where MSF had been working, but the policy had not been extended to the other hospitals. There wasn't enough medicine and all employees had not yet returned.

The health care system was paralyzed for months. It is slowly coming back to life in Abidjan. Given the huge needs and in an effort to decentralize primary health care, MSF is providing support to health centers in several neighborhoods as the system resumes operations.

Generally speaking, the situation has now stabilized. The sound of gunfire is rare and it is safe to travel through the outlying PK 18 neighborhood, the former stronghold of the "Invisible Commando" force. The blockades have disappeared, as have the armed men. (Fighting did flare up in late April between the forces of President Ouattara and Ibrahim Coulibaly's commandos, however.)

The MSF team, which set up its living quarters in the hospital for reasons of security, is still living there. Because the hospital is not centrally located, this arrangement saves the team from having to make long trips. It works well for Marie-Rose, the nurse-anesthetist. She lives in Yopougon and has not been able to go home since March 28. Violence continues in that Abidjan neighborhood, where militias loyal to Laurent Gbagbo maintain their presence.