The post-election violence began to subside almost a month ago, but emergency medical needs remain at critical levels. 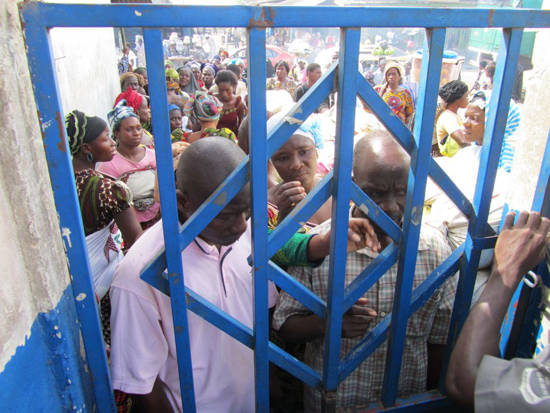 While the post-election violence that wracked Ivory Coast began to subside almost a month ago, emergency medical needs remain at critical levels. In Abidjan, health centers and hospitals are overwhelmed with patients—including newly wounded ones—and medical and drug supplies in the city are still dangerously low. In the west of the country, the situation remains extremely tense as many villages remain empty and people continue to hide in the bush. While some Ivoirians are beginning to return to their homes to try and resume their lives, more than 100,000 remain in Liberia and thousands more are in overcrowded camps in western Ivory Coast.

As Ivorian medical staff slowly begin to return to work, drug and medical supply shortages continue and the health system remains unable to cope with the immense needs. Doctors Without Borders/Médecins Sans Frontières (MSF) is supporting several hospitals and clinics across Abidjan, providing drug donations and running primary and secondary health care projects. MSF teams are both treating patients wounded in the ongoing violence afflicting a number of communities and dealing with a serious backlog of medical emergencies. Many people wounded during the fighting of the past few months, as well as people suffering from chronic diseases, were unable to seek treatment for days, even weeks, and now urgently need surgical care. News of MSF’s free services is spreading, drawing a vast influx of patients seeking general health care and treatment for obstetric emergencies. As a result, MSF will open new projects to meet the needs.

In the general hospital in Yopougon Attié in western Abidjan, an MSF team is handling emergency admissions and surgical and post-surgical activities. In the past three weeks, 307 new patients were admitted, 125 of whom had gunshot or shrapnel wounds. In the past two weeks, the total number of consultations in the hospital has quadrupled as people finally feel secure enough to venture out for treatment. Treatment for malaria and respiratory infections are the most pressing needs. MSF is also supporting the hospital’s maternity ward and MSF staff have helped deliver 25 babies.

MSF is providing free health care to 400 displaced people in the St. Laurent camp, where medical teams have provided 869 consultations, and supporting primary and reproductive healthcare, and facilitating access to treatment for victims of sexual violence, at the nearby Attécoubé medical center.

In northern Abidjan, MSF still receives five to ten people with gun shot injuries in Abobo Sud hospital each day, and there has been with a precipitous rise in the number of sick people and pregnant women with complications. This small facility originally had a 20-bed capacity, but more than 130 beds are now packed into every available space. On average, the teams provide 350 consultations and assist 40 deliveries each day. MSF carries out 80 to 90 blood transfusions every week due to the high numbers of anemic children with malaria.

MSF is also collaborating with Handicap International to help patients in the orthopedic ward rehabilitate after surgery, and an MSF psychologist is providing support as well. In the near future, MSF plans to extend psychological support to medical staff traumatized by the violence they witnessed.

As the Avocatier medical center in Abobo resumes activities, MSF is providing drug donations, paying medical staff, and providing supervisory support. This has made 250 consultations possible and has helped the clinic resume prenatal consultations, deliveries, and its HIV/AIDS program.

To the south, in Abidjan’s Treichville neighborhood, MSF took over the 25-bed Nana Yamoussa clinic in mid-April and began providing emergency surgery in two operating theaters. In the first two weeks, MSF conducted 531 consultations and the surgical team performed 10 to 12 surgeries per day. The clinic was the only place in southern Abidjan that could handle pregnant women with complications. Today, 50 people are crammed into the facility, and there is no room for new patients.

In the Koumassi general hospital, in southeast Abidjan, MSF gave 2,000 primary health care consultations the first week of May and 6,140 consultations in the past month. In the maternity ward, 467 deliveries were performed since activities began. MSF also deployed a mobile clinic to monitor suspected cases of measles.

On April 18, MSF helped reopen the hospital in Anyama, a northern suburb, performing surgeries and providing post-operative care to orthopedic patients referred by the Abobo Sud hospital. MSF also provides pediatric and general healthcare assistance to patients who begin lining up at 5AM each morning to receive treatment.

On May 3, MSF started providing outpatient consultations and pediatric care in Houphouët-Boigny general hospital in Abobo in order to relieve some of the pressure on Abobo Sud hospital. (MSF also plans to start maternity services in this facility.) Similarly, MSF is opening a project in the general hospital of Port Bouët, where MSF staff have been rehabilitating the operating theaters and to which they will soon start referring patients from Nana Yamoussa clinic.

Western Ivory Coast: Many Still Displaced or Hiding in Bush for Fear of Violent Attacks 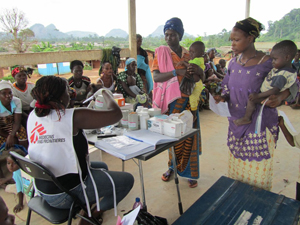 In western Ivory Coast, thousands of displaced people continue to live in overcrowded camps and harsh conditions. Many villages remain deserted, particularly in the areas closest to the Liberian border north and south of Toulepleu. MSF is providing support to the displaced where they have gathered and is running mobile clinics to reach more isolated groups of people.

In Duékoué, an MSF team is supporting the general hospital and increasing its secondary health care activities. MSF also delivers primary health care to 25,000 displaced people in the Catholic Mission camp and is running mobile clinics in villages northeast of Duékoué.

In Guiglo, MSF is present in two health centers and is providing primary healthcare to 4,800 people in a camp around the Nazareth Church. In Nikla hospital, MSF is treating children suffering from acute malnutrition or severe anemia linked to malaria. In the past three weeks, MSF carried out 400 consultations, 40 per cent of which were for malaria.

Many people are still hiding in the bush along the road between Guiglo and Bloléquin, where some villages are empty and others have been burned or destroyed. MSF runs mobile clinics along this road and is conducting assessments south of Guiglo, particularly in Tai, where there are additional reports of people hiding in the bush.

MSF is doubling the number of mobile clinic teams between Danané and Toulepleu, near the border with Liberia, with medical teams visiting 10 sites twice a week. MSF will also start running an inpatient department in a Ministry of Health clinic in Bin Houen, ensuring mobile clinic teams have somewhere to send people who need hospitalization.

There have been reports of killings in the coastal town of Grand Lahou carried out by mercenaries fleeing Abidjan towards Liberia. MSF is donating medical supplies to local health structures nearby and is assessing other needs. MSF is also conducting an exploratory mission in Tabou, on the Liberian border, and in Daloa, in the center of the country.

In the past two weeks, the number of Ivoirian refugees crossing into Liberia decreased dramatically, but people continue to arrive, many of them searching for family members who fled earlier. Some refugees have started to move back, but many thousands more are still too afraid to return or have planted seeds and need to wait for the harvest.

There are an estimated 120,000 refugees in Liberia, though numbers are difficult to confirm. The majority are staying with Liberian families and communities, particularly in Grand Gedeh and Nimba counties. Many of the Liberian families hosting Ivoirians had themselves been refugees  during Liberia's Civil War, when they fled to Ivory Coast.

MSF also works in the outpatients department of the Ministry of Health structure in Bahn, providing care to around 4,500 people from the nearby refugee camp, conducting an average of 50 to 65 consultations per day.