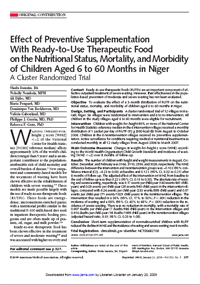 New York, NY, January 21, 2009 — According to a study published today in the Journal of the American Medical Association (JAMA), children in rural Niger who received ready-to-use food in addition to their normal diet were nearly 60 percent less likely to progress to the most life-threatening form of malnutrition than children whose diets were not supplemented.

“Highly nutritious ready-to-use food (RUF) is recommended by the UN for the treatment of severe acute malnutrition,” said Rebecca Freeman Grais, one of the leading authors for Epicentre, the research affiliate of the international medical aid organization Doctors Without Borders/Médecins Sans Frontières (MSF). “But this controlled study demonstrates how ready-to-use food can also prevent malnutrition.”

The 2006-2007 cluster randomized study took place in twelve villages in Niger’s Maradi district during the “hunger-gap,” which precedes the yearly harvest, and included all 3,533 children from six months to five years of age in these villages.

Approximately half the children received a daily ration of an energy-dense fortified ready-to-use food (RUF) for three months as a supplement to their regular diet. During the eight-month trial period, children in both groups were followed once a month. The results showed that those children who had received the paste had a 58% lower chance of suffering from severe acute malnutrition.

“This study has direct implications on food aid and nutrition programming,” said Dr. Tido von Schoen-Angerer, director of MSF’s Access to Essential Medicines Campaign. “Today, most food aid for children is fortified blended flours like the USAID-provided Corn Soy Blend (CSB), which we know lacks the critical nutrients that growing children need and does little to prevent malnutrition. This study shows that providing a nutritionally appropriate alternative to CSB works.”

Undernutrition contributes to 3.5 to 5 million deaths in children under five each year and leads to long-term poor health, disability and poor educational and development outcomes. Preventing severe malnutrition is paramount because the immune system of a severely malnourished child is so impaired that common childhood diseases like respiratory tract infections or stomach viruses can very quickly lead to complications and even death.

The Niger trial used the therapeutic version of an RUF which is a relatively expensive product. But there is reason to believe that alternative lower-cost products can have a similar preventative effect. Alternative products are currently being tried in multiple settings by groups like UNICEF and the World Food Program.

Over the past two years MSF has treated more than 300,000 malnourished children in 22 countries. MSF started to use a preventative strategy with a less expensive lighter food paste in its projects in 2007. Large-scale distributions of such food pastes to small children in the Maradi region reduced the seasonal peak in severe malnutrition.

Article: Effect of Preventive Supplementation With Ready-to-Use Therapeutic Food on the Nutritional Status, Mortality, and Morbidity of Children Aged 6 to 60 Months in Niger: A Cluster Randomized Trial [232KB]