Violence and curfews have forced MSF to suspend its mental health care programs in the Kashmir Valley. 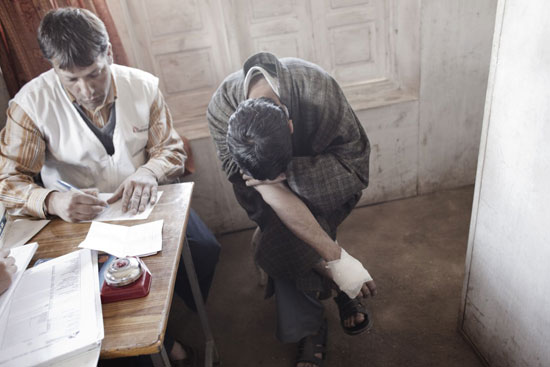 Increasing violence and a new round-the-clock curfew that was imposed on September 12 in Jammu and Kashmir led the international medical humanitarian organization, Doctors Without Borders/Médecins Sans Frontières (MSF) to halt its mental health activities in the Kashmir Valley. This strict curfew is in place in several parts of the state. No person without a valid curfew pass is allowed outside their house, and at times even valid curfew passes are not honored. Road blocks are numerous, shops are closed, and the streets are empty.

The recent violence adds to the heavy toll endured by people who’ve already been traumatized by two decades of conflict and civil unrest. Patients who’ve suffered, for example, gunshot wounds and tear gas shell injuries are customarily treated in the hospitals in the main city of Srinagar. But while their physical injuries are being tended to, many also have psychological needs. Since February 2010, MSF counselors, with the cooperation of hospital staff, have been visiting patients and offering on-the-spot psychological assistance to victims of violence and their families. “We are calling it mental health first aid,” says MSF’s Project Coordinator Sasha Matthews.

But given the curfew and the general security situation, MSF teams have had no access to the hospitals and thus are unable to conduct counseling sessions. “MSF is extremely concerned about how this deteriorating situation will significantly affect people and their mental health,” says Martin Sloot, MSF’s head of mission in India. “Our national staff has been confined to their homes. We have relocated our international staff to a safer place.”

A Resurgence of Violence

The latest surge in violence began in June when Kashmiri demonstrators and the Indian security forces began clashing repeatedly. More than 90 civilians have been killed and hundreds of people have been injured. Day-to-day life has been thoroughly interrupted as the Kashmir Valley has been under curfew for approximately 85 days since the end of June.

Militants and Indian government forces have been battling each other since 1989. Ordinary people have been caught in the middle, victimized by serious human rights abuses committed by both sides. Tens of thousands have been killed and many thousands of people have been disappeared. In an effort to crack down on militants, the Indian government has flooded Kashmir with troops. There are currently an estimated 600,000 soldiers in the region. “Every public space—schools, stadiums, cinemas, markets, everything—has been taken over by the security forces,” says Matthews. “There’s razor-blade, barbed wire across the valley. Every day you see hundreds of military convoys and security forces patrolling the streets. For ordinary people, there is this constant visual reminder of their presence.”

For some years now, many young Kashmiri men made a habit of emerging from Friday prayers and throwing stones at Indian soldiers. “The stone-pelting almost became a ritual,” says Matthews. Earlier this summer, it turned deadly when the soldiers responded with force. People on both sides were injured and civilians were killed.

Mental health first aid, Matthews explains, “is a method of enhancing the patient’s own natural coping strategies after they’ve suffered a traumatic event. We help them to use their own self-healing process successfully.” Counselors provide emotional support by listening to the patient’s stories, helping them come to terms with what happened to them, and offering practical advice on how to deal with any psychological consequences. “Overall, the major goal is to give emotional support to all victims of violence and their families with a caring and practical approach and a neutral and non-judgmental attitude,” Matthews adds.

The counselors later carry out between three to six follow-up sessions. Matthews says they have been well-received thus far despite the stigma associated with mental health issues in Kashmir: “The patients react positively to our presence." Since June, the program has counseled more than 600 people.

Matthews tells the story of a 13-year-old boy who’d been admitted to the hospital after suffering his second gunshot injury. In front of his friends and family, he adamantly rejected the suggestion that he needed any support from a counselor, proclaiming, “I’ve been injured before and I can cope with it.” But when the counselor returned later and the boy was alone, he was grateful for the chance to tell his story and receive professional help.

MSF teams have also provided psychological support to members of the Indian security forces injured in the recent violence. One patient told a counselor, “I’m so happy to see you. You saw a colleague and friend of mine a few days ago, and he advised me to talk to you.”

MSF has been providing a wide range of mental health services in Kashmir since 2001, and particularly mental health first aid for the past six months. “This new strategy has now become a regular activity and the only type that we can carry out when the context is this volatile,” says Matthews.

MSF has worked in Jammu and Kashmir since 2001, offering psychosocial counseling to a population traumatized by over two decades of violence. In 2009, MSF’s mental health program treated more than 5,800 people. MSF also provides psychosocial education to the people of Kashmir in a variety of ways, including a radio show about mental health called “Alaw Baya Alaw” (“Call Brother Call”). In addition, MSF provides basic health care in seven clinics in Kupwara and conducted more than 20,500 consultations in 2009. Over the years, MSF has carried out several emergency interventions in response to natural disasters and epidemics in India. Most recently, MSF responded to the flash floods in Leh and Ladakh.

Doctors Without Borders/Médecins Sans Frontières (MSF) is an international humanitarian medical aid organization working in approximately 65 countries worldwide. MSF is neutral, impartial, independent, and not linked to any political party or government body. MSF has worked in India since 1999 and has provided medical treatment to hundreds of thousands of patients in states including Bihar, Manipur, Assam, Maharashtra, Jharkhand, Jammu & Kashmir, Chhattisgarh, Orissa, Andhra Pradesh, Nagaland and Tamil Nadu. MSF received the Indira Gandhi Prize for Peace, Disarmament and Development in 1996 and was awarded the Nobel Peace Prize in 1999.