View Photo HH
A Syrian refugee woman holds on to her headscarf against the wind while she and her daughter stand outside their tent at an informal tented settlement near the Syrian border on the outskirts of Mafraq, Jordan.
HH
Click to hide Text

More than 75,000 Syrians—three-quarters of them women and children—are stranded in a desert area known as the "Berm" on Jordan’s northeastern borders. During the brief time that MSF was able to operate there in May and June, its medical teams saw extensive medical needs, in particular children suffering from malnutrition and diarrhea. Now MSF has received reports of a disease breaking out but, with all access denied, the disease cannot be identified and people cannot be treated.

“There are unverified reports of a new outbreak of a respiratory illness, manifested by persistent coughing, including several deaths,” said Natalie Thurtle, MSF medical team leader. “In a context of no vaccinations, there is a risk that this could be whooping cough. These cases can only be identified and treated by having physical access to these patients.”

A deadly car bomb attack near the Berm on June 21 prompted Jordan to completely close its borders with Syria, forcing MSF to cease all operations in the Berm after just 23 days. The closure of the border has exacerbated an already dire humanitarian situation for stranded Syrians, who are short of water and food and are living in unsanitary conditions. Although they have received some limited water distributions and one-off food assistance, they have received no medical care whatsoever since June.

Read: New York Times Op-Ed "Save the Refugees on the Berm"

“The Syrians stranded at the Berm are living in dire conditions in a desert devoid of any vegetation, where temperatures soar to 50 degrees Celsius (120 degrees Fahrenheit) in summer and where winters are very harsh and cold,” said Luis Eguiluz, MSF’s head of mission in Jordan. “As a first step, they need to receive full and sustained humanitarian aid, including unhindered access to essential and quality medical care.”

In the light of the current desperate situation in the Berm, MSF calls on the government of Jordan to remove restrictions on humanitarian aid and to allow its medical team to have access to the Berm, so that they can directly assess the medical needs of Syrians stranded there. MSF stresses that it will not endorse any proposal that involves Syrians being pushed or drawn back into Syria, or that does not make provision for the impartial delivery of quality medical care. MSF renews its call to find a long-term solution to the humanitarian situation of Syrians trapped at the Berm.

At the other end of the Syrian-Jordanian border, more than 155 miles to the west of the Berm, war-wounded Syrians are still being denied access from southern Syria to MSF’s emergency surgical program in the Jordanian town of Ramtha. Between September 2013 and June 2016 when the border was closed, more than 2,400 injured Syrians were seen by MSF in the emergency room of Ramtha hospital; now the operating theaters and wards stand nearly empty.

“Currently our hospital is nearly vacant, with only nine patients, when we know that the Syrian wounded are only five kilometers (three miles) away, but cannot get treatment because of this barrier,” says MSF Michael Talotti, project coordinator. “It is a very helpless feeling knowing that casualties are continually mounting, yet the emergency room and operating theaters remain silent.”

Since June 21, MSF has documented 56 cases of war-wounded Syrians in need of emergency evacuation being denied permission to cross into Jordan. Eleven of these were children ages three to 14-years-old.

MSF renews its call on the government of Jordan to allow immediate resumption of medical evacuations of war-wounded Syrians through Jordan’s northwestern borders, so as to offer them the chance to receive lifesaving medical care that is unavailable to them in Syria. 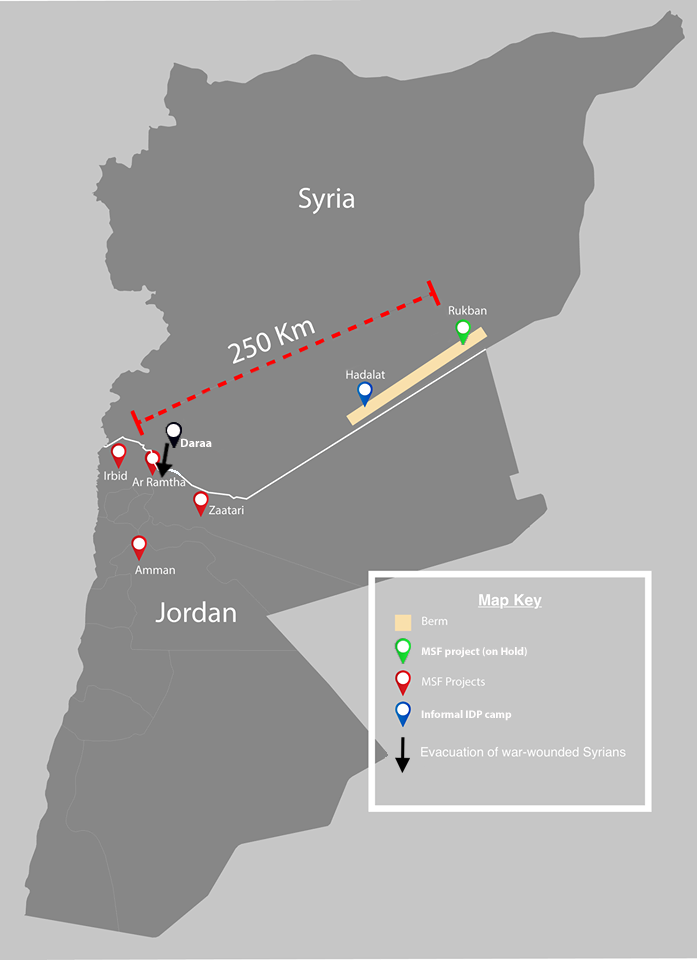 A Syrian refugee child sits next to his grandmother while peeling eggplant for dinner, outside their tent at an informal tented settlement near the Syrian border on the outskirts of Mafraq, Jordan. The number of Syrian refugees stranded in a remote desert area known as "the berm," on the Jordanian border has tripled to 12,000 since last month, the U.N. refugee agency said Tuesday, Dec. 8, 2015.
MSF