After ten years of providing integrated healthcare for people living with HIV/AIDS in Busia, MSF is ready to hand over the program. 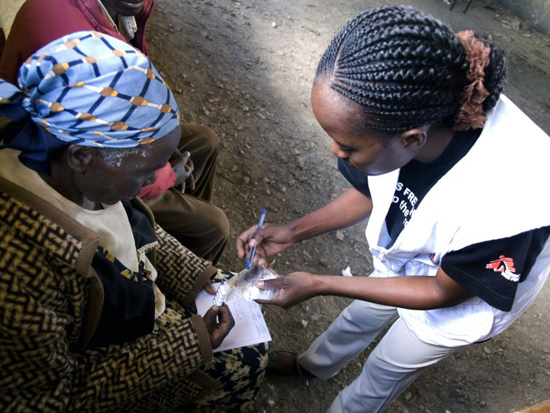 Sitting in his consultation room in SIOPORT district hospital, in Busia, clinical officer Kennedy Ndonga recalls how things used to be for this community in rural Kenya. “Ten years ago people literally had to be carried to the hospital for treatment," he says. "You’d see their family members bringing them on bikes, carrying them on their backs or even in wheelbarrows. The stigma and discrimination surrounding HIV/AIDS was so acute that only the really sick would come to be cared for. The fear was such that even in health facilities, you would find HIV-positive people had been put in a corner by health workers who were too scared to treat them, and they were just lying there, waiting there to die.”

It was at this time, with no actors treating HIV, with anti-retroviral treatment (ART) unavailable, and with the Ministry of Health unable to cope with the huge burden of treating the disease, that Doctors Without Borders/ Médecins Sans Frontières (MSF) started providing HIV/AIDS care in Busia, a rural region in western Kenya.

Kenya: From Discrimination to Positive Living with HIV

In 2000, the HIV prevalence in the country was estimated to be 14 percent. In Busia it was more than double that, 30 percent. Over the past ten years, MSF's staff in Busia, working closely with the Ministry of Health (MoH), have treated and cared for more than 13,300 people living with the disease, some 4,000 of whom were started on ART.

Providing integrated HIV care has been key to this success. Outside Ndonga’s consultation room, the waiting area is packed with men, women and children here for their appointments. On average, the MSF and MoH staff at the clinic, working side by side, will see more than 100 people each day. Some are HIV-positive, some are not. And this is the essence of integrated care, which incorporates HIV care into regular primary health care, so people living with HIV/AIDS can access health services just like anyone else.

This approach has had a huge impact on increasing the numbers of HIV-positive people seeking treatment in Busia and has also greatly reduced the stigma and discrimination surrounding the disease. “Instead of having to go to different clinics on different days and having to sit in separate waiting areas, people living with HIV come here and visit the doctor just like anyone else,” explains Ndonga. “A pregnant mother with HIV, for example, can come here and receive a regular check up, antenatal care, prevention of mother-to-child-transmission care, family planning, and immunization for her children all on the same day. It’s a one stop service.”

Integrating care is no easy task; MSF worked hard to make this system work. Regular and open dialogue with the MoH was crucial. In some clinics, MSF had to provide extra staff in order to care for the increasing numbers of people coming for treatment. Frequent training and ongoing mentorship for all staff was provided. A number of the clinics had to be renovated and extra rooms built. Yet the investment was worthwhile, as both staff and patients benefit hugely from integrated HIV/AIDS care.

After ten years in Busia, MSF is now able to hand over its activities to another organization. What was once considered impossible–providing HIV/AIDS care in a rural, resource-poor setting–has been achieved with great success. Challenges remain but providing integrated care can go a long way towards overcoming them.