At dawn on April 6, around 50 shipwreck survivors received assistance from MSF and other agencies working on Lampedusa. 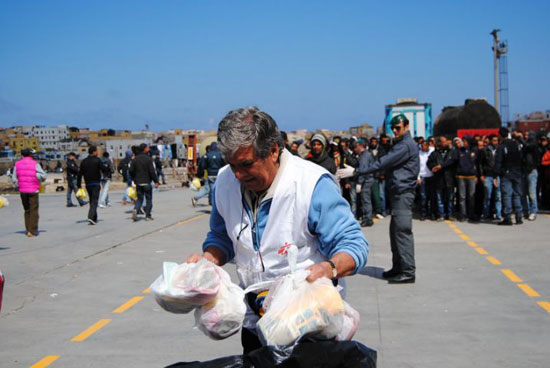 MSF staff distribute basic items, such hygiene kits, to migrants who have arrived on the island of Lampedusa.

At dawn on April 6, around 50 survivors from a boat that sank off the coast of the Italian island of Lampedusa received assistance from Doctors Without Borders/Médecins Sans Frontières (MSF) and other agencies working on the island. Fifteen migrants are believed to have died; the coast guard is still looking for 150 to 250 who remain missing.

When the survivors arrived on the island, MSF’s medical team immediately began triaging the patients based on the severity of their injuries. “We were notified right away of the survivors’ arrival and quickly went down to the port,” said Angelina Perrli, an MSF nurse.“They were in good health, but most were in a state of shock. We gave them blankets to protect them against hypothermia.”

MSF also provided medical follow-up to the migrants after they were transferred to reception and detention centers. The most common ailments were gastrointestinal, pulmonary, and respiratory infections.

“In the past week, MSF teams have examined more than 600 migrants from Libya,” said Aurélie Ponthieu, an MSF legal advisor on migratory issues. “They come mainly from sub-Saharan Africa and are fleeing conflicts or very difficult socioeconomic conditions.”

Many survivors of the shipwreck arrived in Lampedusa in a state of extreme fatigue because of the difficult conditions experienced on the voyage. One young Somali survivor explained his condition: “I received injuries to the face when the boat took on water…. I know how to swim, but two other passengers were holding on to me so as not to drown…. It was a struggle to survive.”

Those who were rescued also told the team that a number of pregnant women died during the voyage.

In addition to medical care, MSF is offering psychological support to migrants who have survived the shock of a long and arduous voyage and whose futures in detention remain uncertain.

The MSF team in Lampedusa now consists of a field coordinator, a doctor, a nurse, two cultural interpreters, a logistics expert, and a psychologist. MSF manages the triage of patients arriving at the military port and their medical follow-up in the island’s reception and detention centers. MSF has also taken on the role of evaluating migrants’ living conditions and access to care in detention centers located on the mainland.

MSF’s activities are funded by private donors and the organization receives no institutional funding from the Italian government.