MSF has opened a new project in northern Lebanon following the arrival of 4,500 Syrians fleeing unrest in their country. 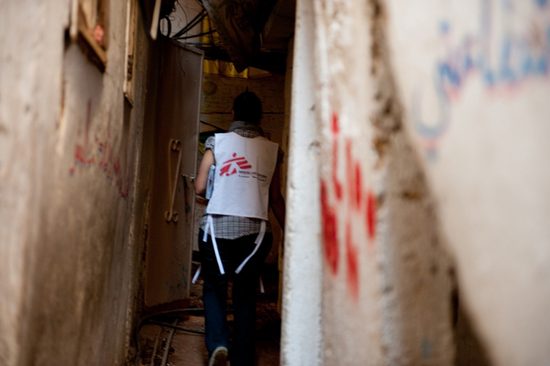 Doctors Without Borders/Médecins Sans Frontières (MSF) has been providing mental health care in two refugee camps in Lebanon for the past three years, both to Palestinian refugees and to vulnerable Lebanese in the area. Now MSF has opened a new project in northern Lebanon, following the arrival of 4,500 Syrians fleeing the unrest in their country. Bruno Jochum, general director of MSF-Switzerland, is just back from the region.

What was the reason for your visit to Lebanon?

In 1976, MSF carried out its first wartime mission in Lebanon and became a professional medical emergency organization. This year, having recently celebrated our fortieth anniversary, we feel it is essential to share our principles of financial and medical independence, impartiality, and neutrality. We believe it is important to talk publicly about these principles—as we did in December at the Beirut launch of an Arabic-language book entitled In the Eyes of Others: Perceptions of Humanitarian Action and of MSF. My visit to Lebanon was an opportunity to restate—to the authorities and to people in the region—MSF’s readiness and commitment to provide independent, neutral, and impartial health care in situations where humanitarian needs exist.

Why is MSF working in Lebanon?

Following the 2006 war [between Israel and Hezbollah], once the immediate response to the crisis had taken place, MSF made the worrying discovery that there was little mental health care available.

MSF has put in place several mental health programs for Palestinians and Lebanese people living in and around the two largest refugee camps in Lebanon: Burj el-Barajneh in Beirut and Ein el-Hilweh in Saida. Over the past three years, more than 2,200 patients have benefited from free psychological care, provided through a multidisciplinary, community-based approach. In total, more than 15,500 free-of-charge psychological and psychiatric consultations have taken place.

Why did MSF decide to start working in north Lebanon?

Recently, with thousands of Syrians—many of whom have physical wounds—fleeing the violence in their country and seeking refuge in Lebanon, we dispatched medical teams to evaluate their health status. This resulted in our setting up a new health program in Wadi Khaled, in the north of Lebanon, in November 2011. We have been working in Lebanon for three years, and were therefore in a position to closely monitor the health situation for Syrians arriving in the country.

The support we are providing today is limited. Our first approach was to provide stocks of emergency supplies to health centers near the border with Syria. Besides mental health services, MSF is increasing its capacity in the area to respond to any further and significant influx of people from Syria by reinforcing epidemiological surveillance, vaccinations, chronic disease management, and emergency medical equipment, while assessing further medical needs. The presence of an independent international medical organization like MSF also provides a guarantee of neutrality to those arriving from Syria.

What is the humanitarian situation in northern Lebanon?

Most of the Syrians who fled their own country in need of medical care had to leave all their belongings behind. Even if the situation remains relatively stable in Lebanon, it is difficult to predict what will happen in Syria. As an emergency medical humanitarian organization, we need to be prepared in case of a massive influx of people to the area. Our purpose is to guarantee medical care in the case of the arrival of large numbers of wounded Syrians fleeing violence.

What is the humanitarian and medical situation in Syria?

It is very hard for us to get a precise picture of the humanitarian and medical situation in Syria and the magnitude of the needs to which we could respond. Based on our experiences in Libya and Bahrain, and on stories from patients and doctors in Syria, the likely pattern is that the wounded cannot be treated in the public hospitals managed by government authorities where they may be especially vulnerable. Today the Syrian population is faced with enormous difficulties in accessing necessary levels of emergency medical care. It is essential that all parties respect basic medical ethics, the impartiality of medical facilities, the day-to-day work of doctors and nurses, and the safety of patients.

MSF remains committed to responding to the humanitarian needs in Syria and providing the required assistance to the Syrian population if and when access is finally granted. MSF remains very concerned that victims of the conflict may not be able to access medical care, and reiterates the right of Syrians to flee violence in search of refuge and medical assistance.