In this blog post from BMJ Group Blogs, lawyer and India manager of MSF's Access Campaign Leena Menghaney discusses the two legal battles that are taking center stage in the struggle over India's medicines patent law. 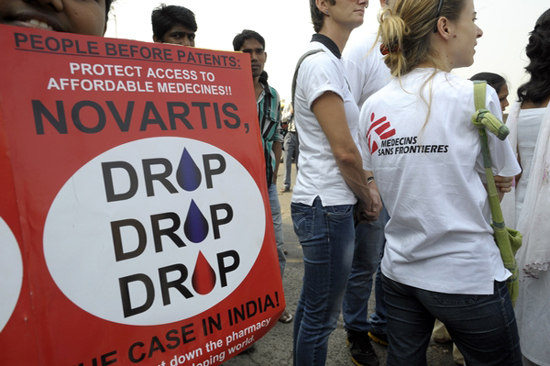 This month, two critical legal battles between multinational pharmaceutical companies and the Indian government are taking center stage in an ongoing struggle over India’s medicines patent law. The potential consequences could be dire for governments and people in developing countries that rely on affordable, quality generic medicines produced in India. For example, more than 80% of antiretrovirals (ARVs) used by donor funded HIV treatment programmes globally between 2003 and 2008 were sourced from generic manufacturers in India. [1]

At stake are public health safeguards within India’s patent law that allow India to provide life saving drugs at affordable prices. One case goes to the heart of what merits a patent. The other addresses what countries can do when patented life saving medicines are priced out of reach for the vast majority of patients.

India’s 1970 Patents Act was a watershed law designed to encourage the development and production of low-cost generic medicines. Over time, it helped India become the “pharmacy of the developing world,” with generic manufacturers competing for markets and thereby dramatically driving down prices of medicines that were patented elsewhere. For example, the cost of first generation HIV treatment dropped from over $10,000 per patient per year in 2000 to $350 by 2001. Today, improved first line treatment costs roughly $120 yearly. [2]

By joining the World Trade Organization in 1995, India became obligated to start granting pharmaceutical patents within a decade. But in 2005, the country adopted a strict medicines patent law that, while ensuring patent protection for new pharmaceutical compounds, makes it tougher to get a patent on new forms of existing medicines. The law was designed with the social objective of stopping drug giants from indulging in “evergreening,” a common abusive patenting practice in the pharmaceutical industry aimed at filing and then obtaining separate patents relating to different aspects of the same medicine.

This tougher patentability standard—Section 3d of India’s patent law—is at the crux of Swiss company Novartis’ six year legal battle against the Indian government, which has now reached India’s Supreme Court. Novartis is contesting the Indian patent office’s and appellate body’s decision to reject the company’s application for a secondary patent on the salt form of imatinib, a life saving drug for treating chronic myeloid leukemia. (The basic research that led to the original drug was conducted largely in publicly funded US research institutions. [3])

Novartis is arguing that the interpretation of Section 3(d) as applied by the courts and patent office is narrow and should be broadened, in this case, for example, to allow patenting of the mesylate salt form of imatinib on the basis of a 30% increase in bioavailability. But this reasoning is flawed, according to patient and public interest groups. Selecting a particular salt of an active ingredient as a means of improving bioavailability is a common practice within the pharmaceutical industry, and should not be considered patentable.

A win for Novartis would set a dangerous precedent, severely weakening India’s legal norms against evergreening and inevitably leading to patents being granted far more widely in the country. Filing patent applications covering simple changes in the chemistry or formulation of existing pharmaceutical products is a lucrative game for the pharmaceutical business, but also a deadly one for patients: it would prevent generic competition for these products and allow pharmaceutical companies to continue charging high prices, which can mean the difference between life and death.

The second case now playing out in India’s courts revolves around the issue of “compulsory licensing,” a legal mechanism sanctioned by international trade law that allows governments to authorise production of a medicine by a company other than its patent holder, in the interest of public health. In March 2012, India’s Patent Controller took the unprecedented step of issuing a compulsory license to an Indian generic manufacturer: with German pharmaceutical company Bayer charging $5,500 per person per month in India for a kidney and liver cancer medicine (sorafenib tosylate, marketed as Nexavar), the Indian government deemed this price unaffordable and granted a compulsory license to generic manufacturer Natco. As a result, a generic version is now available for 97% less ($175/month).

India has faced political backlash from the US for this landmark move, one which health advocates and patients worldwide hope will set a precedent for other life-saving medicines deemed unaffordable. For example, unlike first-generation ARVs, several of the newest HIV medicines—needed by patients who have become resistant to their drug regimens—are patented in India, preventing generic competition. One of them is the integrase inhibitor raltegravir, which Médecins Sans Frontières (MSF) uses in its Mumbai clinic to treat people who developed resistance to two drug regimens, at a cost of $1,750 per person/year—for just one drug of a needed triple drug cocktail.

Bayer has appealed India’s granting of a compulsory license, and the case is now with the country’s Intellectual Property Appellate Board—and may, like the Novartis case, eventually reach India’s highest court. The world is watching closely, as these cases could have a profound impact on access to life saving medicines for millions of people worldwide.

Leena Menghaney is a lawyer and India manager of the Access Campaign at Médecins Sans Frontières.