Libya: Access to People Trapped in the Fighting Severely Restricted

Security conditions have made it effectively impossible for medical teams to travel safely to areas where fighting has created the most needs. 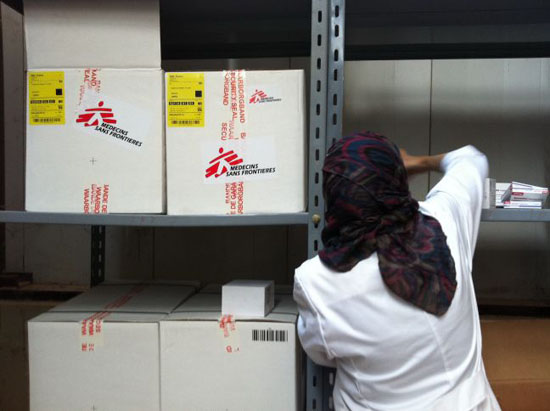 MSF personnel at work in Benghazi before the ongoing fighting forced teams out of the city.

Amid fierce and ongoing fighting in Libya, Doctors Without Borders/Médecins Sans Frontières (MSF) has been forced to withdraw its staff from Benghazi. The teams have moved to Alexandria, Egypt, or are on their way there. They will try to continue supporting Libyan health facilities, primarily through provision of medicines and medical materials.

To date, MSF has made 33 tons of medical supplies available, but security conditions have made it effectively impossible for medical teams to travel safely to areas where the fighting has created the greatest needs. On two different occasions last week, an MSF team tried to reach the fiercely-contested town of Ras Lanuf but was forced to turn back due to insecurity. Similarly, a team that went to Brega and planned to set up a small operating theater had to postpone its activities as the frontline moved east. The surgical team, too, is now on standby in Alexandria.

An MSF team that arrived in Tunisia on February 23 continues its efforts to cross into Libya from the west, to provide medical-humanitarian assistance to people stuck or wounded in the fighting. However, the Libyan authorities are still forbidding MSF to enter the country.

MSF has a 25-person team working in Ras Ajdir and Dehiba, two frontier points on the border with Libya. Though the southern frontier crossing at Dehiba sees a far lower numbers of migrants crossing the border into Tunisia, a small team of doctors and psychologists are assisting those that arrive. At the much busier entry point at Ras Ajdir, MSF has set up two tents, one at the border itself and the other in the transit camp where approximately 18,000 people are currently seeking refuge while they await repatriation or resettlement, depending on their status.

With the support of numerous international organizations, Tunisians are covering the immediate medical-humanitarian needs in the border area. But MSF did detect a need to set up a mental health care program, which has now been open since March 4. Many of the migrants crossing into Tunisia say they witnessed or underwent varying degrees and forms of violence while in Libya and en route to Tunisia, and they also face an uncertain future. The psychosocial programs, which include group sessions and individual consultations, help migrants deal with their experiences and alleviate their suffering while in transit.

The MSF team in Tunisia is equipped with around 16 tons of medical and logistical material, and more is on the way.

In addition, MSF has small teams in Malta and on the Italian island of Lampedusa offering medical assistance, mainly through mobile clinics, to migrants who have crossed the Mediterranean.