Libya: MSF Expands Its Support As The Fighting Continues

MSF is expanding its assistance in Misrata, Benghazi, Zintan, in camps along the Libyan-Tunisian border, and on the Italian islands of Lampedusa and Sicily. 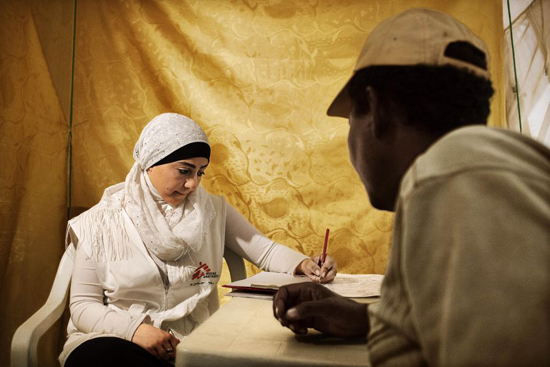 MSF staff carries out a consultation with a refugee at a camp just inside the Tunisian border.

The conflict continues in Libya, where, generally speaking, the insurgency controls the east while pro-Gaddafi forces hold much of the west.

Heavy fighting around the city of Misrata in western Libya is engulfing more and more civilians. The situation of migrant workers in Libya is another particular concern. Many have left on perilous boat journeys to Europe or have fled to refugee camps in Tunisia, where they face further violence and insecurity.

MSF has been present in Libya since February 25 and is presently expanding its assistance in the cities of Misrata, Benghazi, Zintan, in camps along the Libyan-Tunisian border, and on the Italian islands of Lampedusa and Sicily. MSF has offered to establish activities in pro-Gaddafi areas as well, but those offers have thus far been declined by the government.

In Misrata, MSF is performing war and post-conflict surgery such as skin grafts and plastic surgery in the Abbad hospital. MSF has also set up two operating theaters in Kasr Ahmed hospital to respond to other surgical and medical needs. Furthermore, MSF is working alongside Libyan medical staff in the Ras Tubah hospital and is assisting with around 15 deliveries per day.

MSF has trained a team of 20 psychologists, who are now delivering psychological care to medical staff and patients in four hospitals in the city. “Although the frontline has moved outside of the city center, people here are still having to cope with very difficult conditions," said Renzo Fricke, MSF’s Emergency Coordinator in Misrata. "They suffer the psychological trauma of having experienced heavy fighting on their doorstep, and are living under siege. It’s inhumane to be forced to endure such conditions.”

MSF surgeons have been providing training to Libyan medical staff who lack experience with trauma surgery. Basic training has also been provided to medical students who have volunteered to work as nurses, because most of the nurses who had been in the city were foreigners and have now fled the country.

Outside Misrata, MSF is providing support to advanced medical posts closer to the frontline that deliver first aid to the wounded before referring them to Misrata hospitals by ambulance. This support includes training of the medical staff and donations of medical and communication equipment.

In Zintan, in western Libyan, an MSF team has been supporting the hospital, managing the influx of wounded—more than 120 were admitted in the last month—following fighting in the Nafusa Mountain region. MSF has also been providing training, medical equipment, and medicines to the hospital.

On May 27, the MSF team was forced to evacuate following repeated shelling; several rockets landed only meters away from the hospital. A scaled-down, two-person team returned to Zintan on June 4 to assess the situation and resume medical activities. The environment remains highly precarious, however; shelling continues in and around the city. Patients admitted to the hospital are currently being referred to medical facilities in Tunisia or the nearby Libyan city of Jadu.

In the former battleground of Benghazi, MSF focuses on mental health care for women and children as well as medical staff who were working when fighting took place in the city. An MSF psychologist is training Libyan psychologists to screen patients with trauma or trauma-related syndromes, especially depression.

MSF is also providing support to the central pharmacy in the procurement of drugs, although less support is needed now as more international organizations are present in the city.

MSF also supports gynecological and antenatal care in three sites between Benghazi and the town of Ajdabiya.

Refugees Fleeing to Tunisia and Italy

Thousands of Libyan families have fled the Nafusa Mountain region and made their way over the Tunisian border. Between early April and the beginning of June, more than 60,000 Libyans fled the conflict and sought refuge along the Tunisia-Libya border.

MSF is supporting local health infrastructures to cope with the growing medical needs. MSF has also set up mobile clinics in refugee camps in the areas of Remada and Dehibat, providing medical care and mental healthcare to the refugee population. The situation in Dehibat is tense, with fighting and shelling from across the border continuing.

Since early March, MSF has been running a mental health program in the Ras Adjir transit camps at the northern edge of Tunisia-Libya border, where nearly 4,000 people—mainly sub-Saharan Africans who witnessed or directly experienced violence in the course of their escape from Libya—are stranded, unable be repatriated due to the situation in their country of origin.

In Shousha, the largest camp, tensions have risen as the situation has grown more and more protracted. At the end of May, four refugees died when a fire spread through the camp. This was followed by violent demonstrations against the poor living conditions in the camp. At least two people were killed, many more were injured, and two-thirds of the camp was burnt down. The day after the incidents, MSF distributed food, water, and non-food items to approximately 4,000 people, and provided medical and mental health care as well.

While the situation in the camp has returned to normal, a climate of fear and mistrust reigns; many have reportedly crossed the border back to Libya, risking their lives again in search of a future. Since the end May, MSF has also been providing primary health care to the Shousha camp’s population. A number of refugees have presented with injuries linked to the recent violent events, while other complaints have been linked to the poor living conditions and overcrowding inside the camp.

On the Italian island of Lampedusa, MSF looks after the triage of patients upon their arrival and provides medical follow-ups in the island’s detention and reception centers. From February through May, MSF assisted almost 12,000 people in Lampedusa who fled the conflict in Libya. MSF also provides mental health support in a reception center in Mineo, in Sicily, where about 3,500 migrants of various nationalities have been transferred since March. In addition, MSF has taken on the role of evaluating the migrants’ living conditions and access to care in detention centers in mainland Italy.