MSF continues to look for ways to deliver medicine, supplies, and care to areas affected by violence 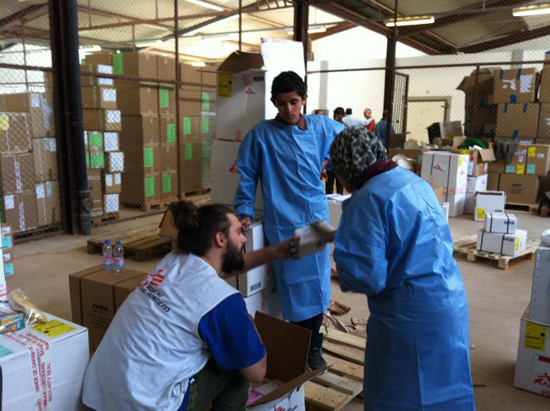 The international medical humanitarian organization Doctors Without Borders/Médecins Sans Frontières (MSF) denies all reports that a medical doctor working for MSF was taken in Benghazi on March 8. No MSF staff has been taken in Libya.

MSF teams have been present in Benghazi since February 24 and continue to support Libyan medical staff, particularly in Benghazi, Brega, and Ajdabiya.

Since the first Doctors Without Borders/Médecins Sans Frontières (MSF) team was able to cross the Egyptian border into Libya on February 24, MSF has been assessing the situation in various medical facilities in Benghazi and surrounding towns such as Brega and Ajdabya, as well as donating medical supplies.

Thus far, MSF has delivered 22 tons of medical equipment and supplies to the Benghazi central pharmacy, including drugs, burn kits, dressings, sutures, and external fixators. Eleven tons of additional supplies are on the way to Benghazi, ready to be dispatched to areas where the ongoing fighting has created supply shortages and needs.

The MSF team continues to try and access Ras Lanuf and other areas to the west, but insecurity and fighting continue to make such assessments impossible.

On March 3, an MSF surgical team visited the only hospital in the town of Ajdabiya, approximately 160 kilometers (96 miles) from Benghazi. The day before, 30 wounded people had been admitted there and 11 died. In general, though, the hospital was able to deal with the influx of patients, and the needs were covered at the time of the visit.

When clashes west of Ras Lanuf generated another wave of wounded in Ajdabya hospital, an MSF operating-theater nurse spent the night in the surgical ward assisting with 10 surgical interventions on patients suffering from gunshot wounds. In all, 50 wounded people were received that day in Ajdabiya hospital.

MSF is working on delivering more drugs and supplies. Medical doctors in a number of locations have requested MSF's support, but access is still extremely difficult in much of the country. On March 6, for instance, an MSF team headed for Ras Lanuf was unable to continue due to high insecurity. And an MSF team has been deployed at the Tunisia-Libya border since February 23, ready to send medical staff and supplies as soon as the border opens.

While most of the migrants’ needs are being met, MSF has launched a mental health care program, as many of these people either witnessed or suffered various forms of violence while in Libya and face great uncertainty in their immediate future.

MSF is monitoring the situation from the border and is prepared to provide medical-humanitarian assistance. Wounded people are reportedly not allowed out of Libya and very few cases of wounded people crossing the Tunisian border have been reported. MSF is currently looking at all ways to send more medicine and medical supplies to meet the needs expressed by medical staff inside western Libya.