View Photo Libya 2018 © Sara Creta/MSF
A man inside a detention in Khoms, about 75 miles east of Tripoli. On September 2nd, 2018, 276 people were brought by the Libyan coast guard to Khoms. They were then transferred to detention center where MSF works. Survivors told MSF teams that over a hundred people died in the shipwreck.
Libya 2018 © Sara Creta/MSF
Click to hide Text

Since fighting erupted in Tripoli, Libya, on April 4, 2019, Doctors Without Borders/Médecins Sans Frontières (MSF) has called for the urgent evacuation of detained refugees and migrants whose lives are in danger as the conflict rages around them.

So far, only 455 people have been moved out of the country, while between 300 and 400 people attempting to leave Libya have been intercepted at sea, forcibly returned to Libya in violation of international law, and detained under the same dangerous conditions as before. More than 3,000 refugees and migrants continue to be held in the Tripoli area as fighting continues and conditions worsen in the detention centers.

"The conditions in detention centers have shown a noticeable deterioration since the start of the conflict," said Sam Turner, MSF head of mission for Libya. "There are currently 500 people in one detention center who have no water whatsoever. We have received increasingly distressing reports of people in detention centers who are in such a state of despair that they have considered taking their own lives, or they have done so. These people are begging, they are pleading for someone to help them. And we can only do so much."

On the night of May 7, airstrikes hit the Tajoura detention center compound in Tripoli, about 250 feet from where refugee and migrant women were detained. Shrapnel from the blast tore through the roof of the room and nearly hit an infant.

"The international community is deeply responsible for the current situation in Libya," Turner said. "They must urgently offer spaces for humanitarian evacuation for refugees and migrants out of Libya so they can escape these detention centers and escape this conflict."

Mental health needs are exacerbated by the poor and inhumane conditions of the detention centers and prior traumatic events. Common symptoms include fear, anxiety, insomnia, and depression.

"Many have experienced deeply traumatic episodes of torture while being held by human traffickers," said Sandra Miller, who worked as the MSF nurse activity manager in Tripoli for the past six months. "Others have seen their loved ones drown before their eyes while trying to flee across the Mediterranean Sea, only to be intercepted and returned back to Libya."

In late April, refugees and migrants at Abu Salim detention center described how the walls shook with the blasts of nearby heavy weapons, and food supplies were limited.

"We are trapped, we are suffering, we are shaken by this war," said one man, from Eritrea. "Please evacuate us from this area."

Another man, from Darfur, Sudan, described fleeing his village during fighting several years ago, and finding himself trapped in another war zone.

"After the burning of my village, I fled to several places, until I ended up here," he said. "We feel frustrated, like we are not human. We don’t receive good treatment. We are like a ball that they are playing with."

On two occasions, he attempted to leave Libya by boat, through the Mediterranean Sea, but was intercepted and brought back to detention in Libya.

"We always hear that the countries beyond the Mediterranean Sea have no wars and no problems," he said. "If someone wants to get away from trouble and from war, they would go there." 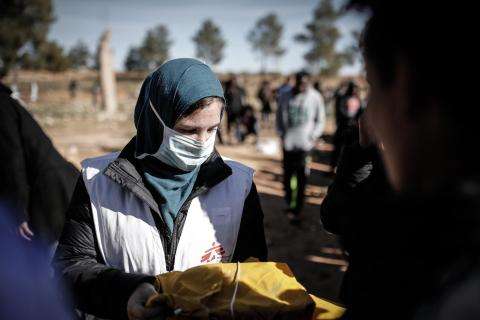 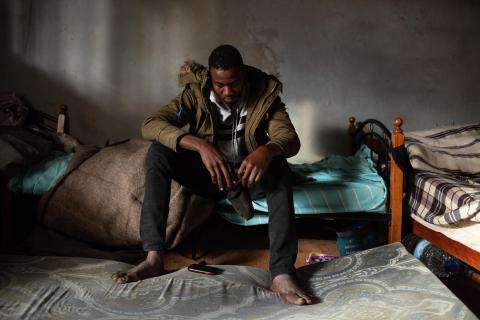