Libya: An Update of MSF's Activities

Some improvements are visible in Tripoli, but there's a sizable backlog of patients awaiting secondary surgery and signifcant numbers of migrants living in deplorable conditions. 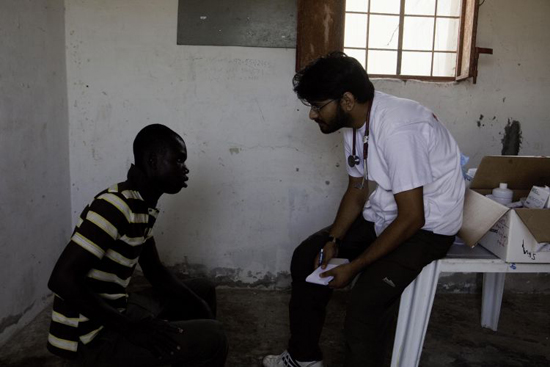 An MSF doctor consults with one of hundreds of migrants living without shelter or services on the outskirts of Tripoli.

As teams from Doctors Without Borders/Médecins San Frontières (MSF) continued to evaluate medical facilities in Tripoli, they noted some improvements. Health staff are slowly returning to their hospitals and clinics. Patients have more access to facilities. The supply of water, medicine, electricity and fuel is slowly resuming, and MSF was able to send 20 tons of relief supplies into the city by boat—primarily medical supplies, water, and medicine.

The fighting in the capital created a huge need for surgical interventions, but the MSF medical and surgical teams that were supporting the emergency room and intensive care unit at Tripoli Central hospital saw the number of wounded patients decrease in recent days to the point where their assistance was no longer needed. That said, due to the earlier fighting, there is still a backlog of patients in city hospitals waiting for secondary surgical interventions. To help address the need, an MSF surgical team started working alongside local health personnel to operate on orthopedic cases at the Ben Ashour clinic in central Tripoli on September 1.

Also in the capital, an MSF medical team is carrying out consultations at two sites where approximately 1,000 migrants have sought refuge; most of their medical complaints are linked to the deplorable living conditions in the ad hoc camps. The majority of people are staying in makeshift shelters without water, food, electricity or access to proper health care. They say they live in constant fear and are being intimidated and harassed by unidentified armed men. Most of the patients also suffer from psychosomatic complaints and show signs of stress due to extreme anxiety. Two MSF psychologists are setting up a mental health program in the camp.

Elsewhere in the country: In Zintan, the mental health program continues to work both in health facilities and in the community. MSF is also preparing to support the gynecological-obstetrics unit of the hospital with an OB/GYN, a midwife, and an anesthesist.

In Yefren, MSF is still supporting the hospital and is preparing to launch a small mental health support program. MSF is running a mental health program in Misrata, providing medical—and in particular, post operative care—and mental health activities for prisoners in the military and civilian prisons and supporting Zliten Hospital with staff and materials. Two other MSF programs in Misrata hospitals are carrying out emergency surgery and trauma-related second-line surgery, in addition to physiotherapy for wounded patients who’ve undergone surgery. Lastly, MSF is providing psychological support to medical staff and patients in Benghazi.